on April 06, 2015
This book was provided to me for free through Netgalley in exchange for an honest review. 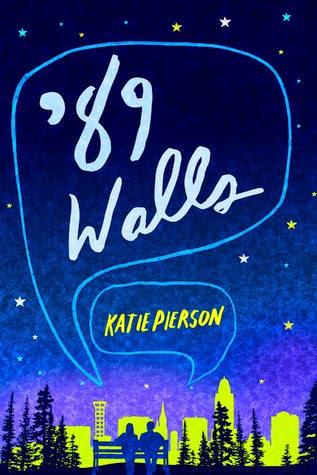 Quinn and Seth are two high school seniors facing the end of high school and the end of the 80s at the same time. Their backgrounds are distinctly different, but it doesn't stop them from being drawn together: Quinn is influenced by her wealthy Republican parents, and clashes with Democrat-leaning Seth, who spends his free time working at the lumberyard to support himself and his mother, who is suffering from MS.

To read the synopsis on Netgalley or Goodreads, one would think that the main attraction of the novel is their "passionate romance." It is important, and it is passionate, but I found their individual character arcs far more interesting. Usually when a story is framed to be about a relationship, it's about the trials and tribulations of that relationship. I felt like the story was more about the trials and tribulations Quinn and Seth faced separately, which sometimes affected their relationship, but also did not. In this sense, it didn't feel like such an angst-filled teen drama, but a very real, very human exploration of growing up.

So, first off, it was an interesting experience for me, reading this book as someone who was a little kid in 1989. (I would've been six, during the events of this novel.) At first, all of the 80s references felt a little heavy-handed at the beginning of the book when it feels a little more light and cutesy. (Let's throw in as many 80s bands we can think of!) But once we start reading scenes from Quinn and David's social studies class, and the discussion of foreign policy, communism, terrorism, etc., begins, that's when the book really begins to shine. In fact, the way Pierson navigates the major political events and issues of 1989 from both sides was the most fascinating aspect of the novel for me, as someone who was too young to understand anything then, and as someone who is old enough to know now. And I found it interesting how relevant the issues in the book were to modern-day issues - I'm sure that was purposeful. We're STILL having discussions about abortion right now. We're STILL having discussions about whether America is really helping other countries or just trying to help ourselves to their resources.

And something I REALLY appreciated was that it was the most nuanced portrayal of Republicans by a pro-Democrat piece in a long time. I got a very strong feeling that the narrative leans Democrat along with Seth, Mr. Levine (the history teacher), and eventually Quinn herself, but I was really impressed by how Quinn's parents were written. Quinn clashes with her father often, as she tries her hand at verbal parrying with someone who clearly has the advantage of an adult perspective. All we hear of Republicans these days - well, all I hear, anyway, but then again, my social circle slants quite liberal/Democrat - is how backwards they are, how racist/sexist/etc. they are, etc. etc. I'm not arguing that there aren't Republicans who are conservative in the extreme, but I am saying that that's kind of all I hear about. So it was really, really fascinating when, in regard to Roe v. Wade, Quinn's father turns to her and says, "You know I'm pro-choice, right? Your mom and I both are." He clarifies that they're both staunchly Republican in the sense that they believe that less government involvement is better, and that that includes being pro-choice.

What a thing to say! What a thing for me to read! I don't think I've ever in my life heard anyone say that, especially not public figures in mainstream media.

This point is made all the more interesting considering how, by the time we actually reach this point in the story, Quinn has already had an abortion without her father's knowledge. I feel like this is so remarkable because for so long, it was rare to see a character make this decision and have it not be a big deal. I've only ever seen one character on television experience this - Cristina Yang on Grey's Anatomy - and only read about one other character in another book (that I won't name here, because I do plan to review it on this blog). Most of the time, they keep the baby (*cough* Bella Cullen *cough*) or they conveniently miscarry (like Julia Salinger in Party of Five. I don't mean that miscarriages themselves are convenient, because they are not, but from a pop culture/political culture standpoint, sometimes writers find it easier to just have the character miscarry instead of making her choose one way or the other and then having viewers get up in arms about it).

So, Quinn, who is still under 18, finds out she's pregnant by her ex and decides to have an abortion, and the only drama that happens comes not from her mother (who handles it beautifully), or from her new boyfriend Seth (who also handles it beautifully), but from the protesters outside the clinic. That moment, rather than the abortion itself, is intense and scary and rather vomit-inducing. And that's it. She doesn't get punished for it. It doesn't completely change the course of her life or become a turning point in the novel. It's an episode that happens, and then it's over. And I thought that was pretty great.

On the other hand, something that is a lifechanger is Seth's mother's illness. It's debilitating for her, and it's a difficult life he leads, taking care of them both. (This book really was an exploration of privilege and lack of privilege.) As far as I could tell (and I am no expert on depictions of disability, so please correct me nicely if I'm wrong), it felt realistic. There were good moments and there were bad moments. There were moments where Seth's mother and Seth himself behave admirably, and there were moments where Seth's mother and Seth himself behave in selfish or flawed ways. Regardless, it's clear how much they both relied on each other before her diagnosis, how much their mother-son relationship changed as her conditioned worsened, and how devastating it is when his mother makes the decision to take her own life. It changes everything for Seth, and her final words to him via suicide note (which definitely made me cry) are the impetus for his choice to go to college.

Hopefully now you can see why I say that Quinn and Seth's romantic relationship is not the most interesting part of the novel. And I don't mean that in a negative way either. All of the above would be difficult to sum up on a book jacket, you know? And I did enjoy seeing them get together. I like how they are drawn to each other - Seth has had a crush on her since 10th grade, and even though it would embarrass him greatly to date a Republican, he sees her kindness and admires it, while Quinn is intrigued by his depth of knowledge and the passion with which he states his views. There is a lot of focus on their sexual feelings for each other, which eventually culminate in consummation, but it's written with care. It's not lurid and erotic, but it's not overly precious either - it feels real. There aren't any cinematic, dreamy-filtered moments. And the conflicts or tensions between one kid and the other kid's parents aren't angsty either, but well-written and real.

I really enjoyed this book. It took a couple chapters for me to really get into it (because, again, it was Mr. Levine's social studies class where things started to pick up for me), but I'm really glad I stuck with it. It was an interesting way for me to relive the events that I didn't remember living through at the time, and to ponder issues and conflicts that are still relevant today through the eyes of teens in another decade.
4 stars Katie Pierson Netgalley YAF