A Little Something Different by Sandy Hall 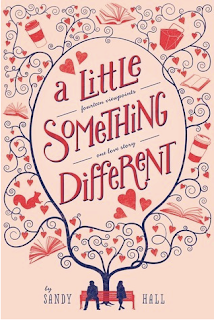 "No one should feel this invested in a couple they aren't a part of," says Inga, the creative writing professor. She is one of the 14 narrative viewpoints in Sandy Hall's A Little Something Different, telling the story of Lea and Gabe, two college students who apparently everyone feels should be together.

The problem is, Gabe is painfully shy and is also sorting out some other issues of his own which prevent him from really opening up to Lea. Lea is shy too, and she feels like she's getting mixed signals from Gabe, so she's not sure if she should be backing off or trying harder.

Considering how they like the same shows and the same Chinese food and they keep turning up in the same places at the same time, it's clear that Fate wants them together... and so do Inga, and Gabe's brother, and Lea's roommate, and all of their friends, and Maxine the waitress, and Bob the bus driver, and Frank the Chinese food delivery guy, and the squirrel that keeps turning up to look for acorns. Victor, their angry classmate from creative writing is annoyed as hell by their disgusting cuteness, but he also thinks they should just suck it up and get together already. And all of the baristas at the Starbucks they frequent have started rooting for them too. Even the bench at the edge of the campus green has an opinion about them.

This is a really cute, fluffy read. There are no deep thoughts or profound messages. It's pure cotton candy, full of hilariously cute and hilariously facepalm-y moments, and it doesn't take long before you start rooting for Gabe and Lea too. Super fun :)

PS - I love that Gabe is Portuguese-Welsh-American (I don't remember a mention of an accent), and he has a disability. And Lea is Chinese-American. And there's a gay best friend. Hashtag: we need diverse books.
4 stars Sandy Hall YAF