Dragons Are People, Too by Sarah Nicolas 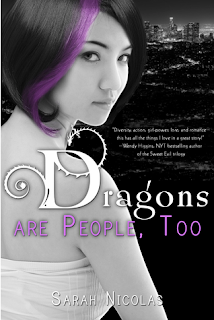 <--- Look at that cover. Just look at it. How could I resist? Asian chick protagonist with purple hair who turns out to be a badass? This book was probably written with me in mind, right, Sarah Nicolas? ;)

Kitty Lung looks like an ordinary teenage girl, but actually, she's a shapeshifting weredragon working for the government, tasked with keeping the President's son Jacob safe. Training since the age of four, she is senior to agents twice her age at the Draconic Intelligence Command (DIC)... and when one of those agents reveals their secret to the world (on her watch) and then Jacob gets kidnapped by some other shape-shifting person (on her watch), her life suddenly turns upside-down.

Suddenly all other known dragons, including her parents, are being rounded up and detained, and it's up to her and her partner/best friend/true love Sani to help rescue Jacob, figure out what's going on with this other shape-shifter, and set free all the other dragons.

So, like I said, I couldn't resist requesting this book. It seemed right up my alley. And it didn't disappoint - it was a really fun, really quick read, and the ending left me curious about a sequel.

In the book, there are people who are also dragons, and the types of dragons that exist are as varied as the types of people. Kitty is Chinese, and is a Chinese dragon, with a long serpent-like body, exactly like the Chinese dragons you've seen at Lunar New Year festivals. Her junior agent, Wallace, is British, and is an English dragon, the more typical-looking dragon you would imagine from medieval legends. Her partner/best friend/true love Sani is an African dragon from Uganda, and I know nothing about dragons from African folklore, so I can't speak to the accuracy, but he is pretty awesome also.

The story is narrated by Kitty herself, and was a breezy, fun read - she's sharp, outspoken, and witty, but definitely a teenage girl (and I appreciated all the Asian mom references). Though she's only 16, she's the more experienced agent between her and Sani, and it falls upon her shoulders to figure out how to help Jacob the best. They learn that he was kidnapped by a kitsune, a shape-shifting fox who has the power to incapacitate dragons through touch and control human minds by looking into their eyes, and they only have 48 hours to figure out where exactly Jacob is being held.

Is it an outrageous story? Sure. But it's totally fun.

There's a bit of a romance between her and Sani, and I liked it because it wasn't the focal point of the story, but I really liked it because it was an interracial romance, and I rarely find individual main characters who are PoC, let alone main character relationships that are between two different PoC. They're a good pair, with her being the hot-tempered, brash leader, and Sani being the perceptive, observant, methodical one.

I'm not going to do a play-by-play of the plot here, but everything does turn out well, except that the kitsune escapes and the other dragons still haven't been released by the end of the book, so I hope this means that there will be at least one other book coming, because I'd like to see how this ends. The incarceration of the weredragons is very pointedly a look at systemic intolerance, and I was highly amused by the news clip Kitty is watching at one point where there is a crowd of protesters passionately calling for their liberation. Good on you guys :)

Yeah, this book was fun. It's not the deepest book, nor the most poetic, nor the most epic, but it was just plain fun, like a popcorn movie, and Kitty is sassy and cool. She makes for a fun protagonist/narrator, and I liked the idea of finally meeting a protagonist that I could identify with, at least aesthetically, so I'm glad I took the time to read this. I'd give it a high-five.
fantasy Netgalley Sarah Nicolas YAF