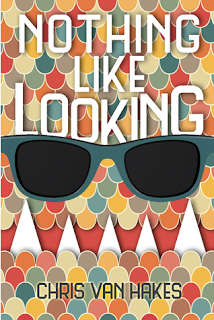 I was initially interested in this book because the blurb reminded me somewhat of E. Lockhart's The Disreputable History of Frankie Landau-Banks (which is a fabulous book that I highly recommend).

In some ways, it was similar - Reed Larson is smart and witty, and as a protagonist/narrator, she made me laugh quite a bit. But where Frankie Landau-Banks was a mastermind, refusing to let other people dictate who she is or where she can belong, Reed was the opposite - infuriatingly passive.

Let me explain: Reed got expelled from her previous school, a really conservative Christian school, because someone told the principal that she was gay (even though she isn't). At her new school, one ultra-pushy girl finds out about this fact, falsely outs Reed to the entire school (which in turn makes Reed super popular because people think it's cool that she's a lesbian... does their school not have any other gay kids?), and proceeds to think of ways to use Reed's status for her own gain. And it takes Reed nearly the ENTIRE book to do anything about it. No, correction: she doesn't actually do anything about it, because it's the same ultra-pushy girl who eventually outs her as a liar at a school assembly.

To what end is Reed so passive? Is there a lesson to be learned here? It's not much of a character arc - it's not like she has a moment of revelation where she triumphantly declares the truth to everyone and learns from the lie she's been complicit in perpetuating. It's someone else who reveals the truth, and then Reed kinda slinks off. No, correction: she doesn't slink off, because that would imply agency; her friends kinda help carry her out. Even when she does have that internal moment of, "Hey, everyone thinks I'm something that I'm not, but I have the power to change that perception if I wanted to. People who are actually LGBT don't have that privilege," it's not followed up with any sort of action or initiative or anything. Homegirl just doesn't. DO. Anything. She just lets other people push her around.

I saw a lot of promise in this novel - this would've been a great forum for discussing straight privilege, for discussing - what's the sexuality equivalent of blackface, if there is one? (If it's grossly offensive for a white person to pretend to be black, then I also think it's rather offensive for a straight person to appropriate a gay persona), for discussing conformity and bravery (since the book also talks about religion and veganism) and I don't know what else... But I'm not convinced that Reed ends up suffering any consequences since everything turns out fine in the end. I don't know, maybe her changes were too subtle for me to detect, but I felt like I was reading quite a static character, and that's very frustrating.

Nothing Like Looking is an entertaining read; it's cute and funny. But MAN, I just wanted to shake the protagonist.
2 stars Chris Van Hakes Netgalley YAF