Polarity in Motion by Brenda Vicars 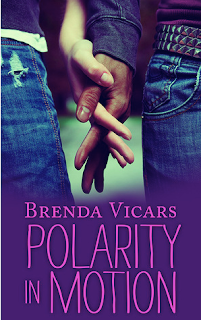 Polarity Weeks is not having an easy time. In addition to being new to her small Texas town, she is bullied relentlessly for living in a trailer park and for being the soft-spoken girl who loves poetry. Her mother has borderline personality disorder, and that doesn't make things easy at home either. The only good thing in her life is her crush on a boy named Ethan.

Things get worse when her classmates discover a nude picture of her on the Internet. Polarity has no idea where it came from, no memory of ever posing for such a picture, but it's definitely her all the same. Suddenly her parents are being investigated for abuse, and she's being sent to the local alternative school for violating a rule about lewd conduct.

Polarity, with Ethan's help, works tirelessly to unravel the mystery of the photo, and along the way she learns valuable lessons about privilege, invisibility, and finding the silver lining.

My god, this book spoke to me on SO many levels, and I hadn't even expected it to - as an educator, as a woman, as a person of color, and as a parent. I requested this galley because what happens to Polarity sounds like one of my worst nightmares, and the more I read, the more I realized that this story is about so much more than a picture on the Internet, and it speaks to Vicars' incredible skill as a storyteller that so many important lessons were woven into this novel. This book definitely made me cry.

Polarity's mother suffers from borderline personality disorder, which is not something I was familiar with before reading this story. From what I can tell, it's incredibly difficult because the disorder makes her mother say things that are hurtful, even if she doesn't truly mean them. It was hard to see the family dynamic between Polarity and her parents when her mother was reaching her limits (I'm sorry, I can't remember the exact phrasing in the book), because I do know what it's like to care about someone whose mental illness makes them lash out in hurtful ways. But it's important to note that while her mother can sometimes come across as rather heartless, there are also moments when she goes to bat for Polarity, lashing out at those who threaten or doubt her daughter, and comes across as a hero too. But it's a difficult line, a delicate balance, and I found myself cringing at what she might say next, just as much as I cheered for her.

The idea of nude pictures on the internet - the struggle is real, and I'm not saying that flippantly at all. This is the world we're living in now. And the photo doesn't even have to be authentic to ruin your life. I honestly don't know what I would do, if I were in Polarity's position or her parents' - it would break my heart in either case. We follow her family as they explore various legal channels and as they struggle with their own feelings about the matter - no one seems to believe Polarity when she says that she didn't pose for the picture and that she had no idea where it came from, including her own parents at one point. But as the mystery unravels, we see more and more of Polarity's amazing strength and resilience.

What also amazed me is that Polarity doesn't necessarily take credit for that resilience either. I mean, she definitely has inner strength, don't get me wrong - but at the same time that she's discovering her inner strength, she's also discovering that she's bolstered by her white privilege, which she absolutely recognizes and reflects on. It makes her realize that, as unfair as the world has been to her, it is still vastly unfair to other people, particularly people of color. When she attends orientation at the alternative school, she notices that she's the only white kid there and also the only kid with both parents. By the end of that first day, her parents have fussed at the administration enough to get her out of riding the bus with the other students from her town and also out of eating the school-provided lunch that all the other students have to eat, since they're not allowed to bring any of their own belongings onto campus. Polarity actually is embarrassed that her parents have done this for her, because she doesn't want special treatment. When her 15-year-old pregnant black friend disappears, Polarity is upset that there is no mention of her anywhere in the news and that the police are doing nothing to find her. After realizing her feelings for Ethan, who is black, she questions why she never said anything before, when one of her bullies used the n-word in class. She notices that she has certain advantages over other people due to her race, and that those dividing lines happen to fall along racial divides. She recognizes this, accepts it, and questions it on their behalf, and this part of her personal journey is just as important as the parts relating directly to her search for the truth about the picture.

When she finally discovers the origin of the photo, it's a bittersweet moment. While there are some truly good kids at her school as well as some truly rotten ones, the truth of who is behind the photo is not as starkly good or bad as the word "polarity" might suggest, but something far closer to the middle. There is a lot less triumph in the moment than one would expect, as Polarity realizes the indirect role she played, when all the pieces fall into place.

Bottom line, I would teach this book. I think there are some important concepts in here that teens, and even adults, could benefit from, and I loved it enough that I would want to find room for it in my curriculum somehow. And that's a pretty high commendation for me to give.
5 stars Brenda Vicars Netgalley YAF