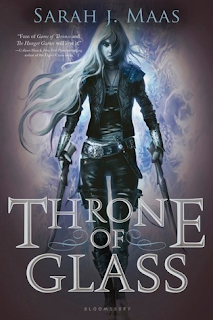 Celaena Sardothien is only 18, but she has earned herself the title of Queen of the Underworld by becoming the continent's deadliest assassin, having trained under the tutelage of the King of Assassins since the age of 8. But she has spent the last year of her life in Endovier, an absolutely brutal prison where she endures day after day of backbreaking labor and whippings, after being captured in what was probably an act of betrayal.

However, she is given a chance at freedom - the Crown Prince of Adarlan himself, Dorian Havilliard, shows up declaring that she will be his sponsored contestant in a competition the King is holding for what is essentially the position of royal assassin. Training with Chaol Westfall, the captain of the Royal Guard, she will need to defeat 22 other dangerous criminals in a series of tests as well as a final duel, in order to become the King's Champion, and after four years of servitude, she will finally earn her freedom. And in the the meantime, there is some evil creature gruesomely eviscerating the competitors one by one, and she needs to figure out what's going on before she becomes the next victim.

I was so impressed with A Court of Thorns and Roses, and after hearing a trusted reader friend tell me that she's loved all of Maas' books, I went ahead and gave this one a try.

It took me a few days to get through, which is more than I usually take for a YA book, and it's because it was dense with rich world-building and mythology. There's a lot of culture, religion, and politics packed into this book, and it's done smoothly (meaning, there isn't just an large section of, "Here is the history of everything, before we even start the plot"). I'm kind of a fan of the Classics anyway, and I appreciated the references. It was a very complete universe, with a long history of political turmoil and corruption, with its own religion and religious holidays and traditions, and its own legends and mythologies.

Celaena is a badass. Seven pages in, she hadn't even left the prison yet, and she'd already plotted out three different ways to kill the guards as she evaluates possible escape routes. She's feral, whip-smart, and deadly, it's made clear that even the toughest of men, including Captain Westfall, are not to underestimate her. In fact, she's accompanied by a sizeable group of guards everywhere she goes because she could easily kill all of them before they could even put a hand to their swords.

But she's not a brute either. She became an assassin to survive - she was found half-dead by the King of Assassins when she was eight years old, and her options were to either go with him or to be left there to die. Her parents had been brutally murdered when the current King of Adarlan took over her home country in a quest for power. Her mentor wasn't a replacement for her parents either - he was a merciless instructor. But she's human after all - she has suffered heartbreak; she can play the piano; she loves to read; she gets really excited about candy. She is touched when someone else is kind to her or wants to be her friend.

Something that separates Celaena from other "strong female YAF protagonists" is that Celaena is not humble. Homegirl's got SWAG, and it's refreshing. She doesn't insist that she's not pretty or desirable (and then end up being The Most Beautiful Girl); she's not socially awkward (quite the opposite - she's got a sharp tongue that tends to get her in trouble); she's not an Everyman in the slightest. She's not a nobody who ends up being The One Special Person Who Can Solve Everything. She's special from the beginning, from the hinted-at faerie heritage to her widespread reputation as the deadliest assassin in all the realm. She is brash; she is sexy; she is scary. They even make her fight under a fake name so that all the other competitors don't realize who she really is (because in her ten years as an assassin, no one realized that Celaena was a young girl and not a seasoned adult).

There is the beginning of a love triangle, but thankfully, so far, it kinda feels like it's there for "flavor" rather than drama. Prince Dorian is also rather brash when it comes to the ladies, and he has quite the reputation for bedding courtiers; obviously Celaena intrigues him because she'd just as soon snap his neck as kiss him. She's not a fawning noblewoman who hopes to be queen someday; in fact, initially, she doesn't seem to want anything to do with him at all.

And yet, it's not even a typical case of hate turning into love - Celaena is disgusted with everything the crown and its royals represent. But she's not above admitting that Dorian is hot. And she likes flirting with him. And he sends her his favorite books to read. She eventually grows to like him, but it's not a mushy lovestruck puppy dog type of thing - she can hold her own, and she probably makes him more nervous than he makes her.

The other corner of the love triangle is Captain Westfall, and it's barely there. As one of the other characters says to Celaena, "You two probably care about each other more than either of you know." He's her trainer for the competition, and their uneasy partnership turns into friendship, which just barely hides the depth of care they have for each other. He's rather strait-laced and purely professional, and Celaena enjoys pushing his boundaries. It will be interesting to see if any sort of relationship even develops over the rest of the series (Don't tell me! I'll be reading them soon!!!!), considering how Celaena's relationship with Dorian is kind of an impossibility due to their positions.

So... the actual competition itself: there is a series of elimination tests over a period of 13 weeks, culminating in a duel between the final four left. They have to demonstrate physical skills like archery, combat, and scaling walls, as well as mental adroitness, such as in identifying poisons. Celaena, posing as Lady Lillian, a jewel thief, is supposed to remain solidly in the middle to escape notice until she gets to the end, even though she could wipe the floor with any of the other men on any given day.

Though quite a few of her competitors are quite odious, her only true rival is a soldier named Cain - a cruel, brutish soldier who is as intimidating physically as he is mentally. He's everyone's pick to win, and he dominates nearly every test. Celaena has to force herself to avoid facing off with him, so as not to give herself away, though eventually it is revealed that he's always known her true identity as the Adarlan Assassin.

The eliminations are somewhat (?) alleviated by the fact that something else has been taking out the competitors. One by one, they are found brutally murdered - their bodies shredded to ribbons, their internal organs presumably eaten by someone or something. Celaena notes that there are rune-like marks discovered near the bodies - in their universe, they're called Wyrdmarks - an old magical alphabet long since forgotten, since the King has purged the land of all magic.

Celaena, for whatever reason (probably her magical faerie heritage that I hope future books go into), is called upon on the night of Samhuinn (like Samhain, right?) by the spirit of the first queen of Adarlan to destroy the evil. She needs to win this competition, the spirit says. "Um, but I was going to anyway!" Celaena replies. There is obviously some greater fate in store for Celaena than merely being the King's Champion, and you know what? I love how contrived it doesn't feel. Because I was totally rooting for Celaena all the way.

The final duel is brutal, and of course it comes down to Cain and Celaena. It really was always going to be between them, anyway. I mean, really, who else could've even come close? And it's made all the more brutal by the fact that Celaena has been drugged by people who hate her, while Cain is hopped up on evil-spirit steroids - it turns out, he was the one using the Wyrdmarks to summon up this creepy evil beast to eat his competitors, so that he can absorb their strength. (I felt like that was waaaay too obvious, by the way. I mean, he's named Cain. And he's been getting bigger and bigger throughout the competition.)

Celaena only emerges victorious thanks to magical interference, and it's made clear that her tribulations are far from over, as she begins her four years of servitude as the king's right hand sword. The end of the book is merely the beginning of what is going to be an epic story.

I think I've found my new favorite YAF heroine. And I can't wait to read the rest of this series.
5 stars fantasy Sarah J. Maas YAF