All the Bright Places by Jennifer Niven 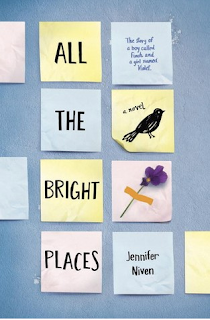 Violet Markey and Theodore Finch - they meet on the ledge of the school bell tower. Violet is still having trouble coping with the death of her sister nine months ago, and Finch is preoccupied with the idea of suicide and different ways to die, in between life with his broken family and his reputation around school as being a freak.

At that particular moment, they both realize that they don't want to jump, and a connection has been forged. Inexplicably (to everyone else at school), they pair up for a project that requires them to wander around Indiana and experience all the interesting sites, and in doing so, they find themselves falling in love. It's Finch who helps Violet work through her trauma, and it's Violet who helps Finch find a spot of happiness. But their time together is drawing to a close, and not just because high school is ending.

I'm seeing this book compared to The Fault in Our Stars, and considering the ending (this book made me ugly-cry too) I can understand why, but tbh, I think it actually has a lot more in common with Looking for Alaska and Paper Towns, in the sense that, intentionally or not, it too delves into the "manic pixie" trope and lays it to rest. (God, sorry, poor choice of words.)


So, in both LFA and PT, you have girls who, for lack of a better term, are considered unpredictable and weird, but exciting and thrilling. There's something legendary about them, and no wonder the main characters of their respective books (both nerdy-ish boys, by the way) find them fascinating. Those girls make them feel alive, and they want to hang on to that - they like the way these girls make them feel. This is of course the manic pixie dream girl trope, in a nutshell. Of course, the problem with this type of character is that she's a plot device meant to further the main character's arc, with no rich inner life of her own, no arc of her own. She's a catalyst for someone else's change and doesn't seem to have any real depth.

Both LFA and PT were John Green's attempts at dismantling that trope, and I'll leave it to you whether you felt he was successful or not. (Spoiler alert: I thought he was. At least, with PT.) I have no idea if Jennifer Niven was trying to do this with All the Bright Things, but even if she wasn't trying, I think it's a hell of a good take-down.

First of all, obviously, Finch is a boy - the usual gender set-up has been swapped, and he's a manic pixie dream boy (which exist in pop culture, but much less than manic pixie dream girls). He's often called a Freak, but he's also legendary - he plays guitar in a bunch of bands, he takes off on road trips, he's really good at sex (apparently - according to the girls he's slept with). Violet, the girl, is the one who is down, who is withdrawn, who is unhappy and self-isolating, and though we're told that she is super popular and used to be a cheerleader, when we the readers meet her, post-accident, she has given up all those popular-girl pursuits. She was always a writer and a reader, but since her sister passed away in a car accident, she is no longer the happy dancing girl at the party.

So on the surface, aside from the genderswap, it looks like a very typical set-up for a manic pixie story, where the manic pixie character swoops in and saves the boring, mousy person from a boring, mousy life by doing all sorts of crazy, silly things.

Except, of course, that Violet isn't boring and mousy - she's dealing with grief and trauma. She's dealing with guilt, because she believes it was her fault that they were in a car accident in the first place, and she escaped the accident with minor injuries while her sister lost her life.

And Finch isn't just crazy and cool for the sake of catalyzing her character arc - he doesn't just come out of nowhere, even if he does save her life. After growing up with an abusive father and an absentee mother and enduring all sorts of bullying from kids at school, his obsession with death is not a cute and funny character trait. It's symptomatic of something much greater and much darker than just a personality quirk. Before the start of the story, Finch experienced a strange blackout period that lasted weeks, and it's unclear why it happened, though it is suggested that it could be a lingering effect of having your ex-hockey-player father slam your head against the wall too many times or of having the school bully punch you in the face too many times. That type of a blackout doesn't just happen for no reason. Finch's mood swings and preoccupation with different ways to commit suicide  and lack of sleep and erratic behavior aren't cute - I mean, maybe they come across as cute to younger or more innocent readers of this book, but to me, they were alarm bells (in addition to the fact that for a big chunk of the book, he's awfully pushy with Violet, to the point of ignoring her boundaries sometimes, and thank goodness she calls him out on it).

It's not hard to see his suicide coming, and not just because it was foreshadowed in the literary sense. But it still hit me really hard. And in the final section of the book, narrated solely by Violet, I found myself crying uncontrollably.

If you've ever loved someone who is broken, if you've ever felt responsible for their brokenness or felt responsible for not being able to rescue them from their brokenness, you might get something out of this book. In her author's note, Jennifer Niven writes that she too once loved a boy who ended up taking his own life, and as someone who nearly experienced the same... I found myself reliving that time. I was profoundly moved by her ability to write both Finch and Violet as more than just "the guy who committed suicide" and "the girl who was left behind." So I greatly appreciated this book, and I wish it had been around all those years ago when I was very nearly in Violet's position myself. My Finch is still alive, but every day is a struggle. The behaviors that other people mistake for being quirky or "manic pixie," at least in this case, are really manifestations of a darkness that has to be fought constantly.

Sorry, that got really personal. It's a good book, and worth a read if you don't mind a good cry.

To end this on a slightly cheery note, let me just say that I love when you buy the hardcover version of a book, and you remove the jacket, and there's something pretty or cool: 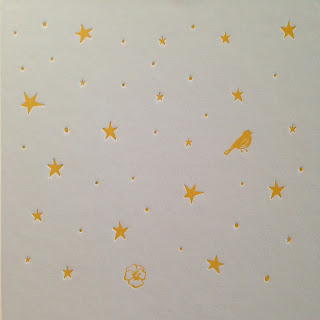 This is on the front cover. The back cover looks similar, except there is no finch or violet, only stars.