Both of Me by Jonathan Friesen 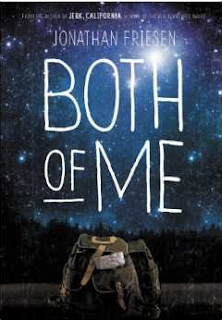 18-year-old Londoner Clara has spent the last 8 months traveling around the world, running from her broken life and some tremendous guilt over something that happened a long time ago. While on a flight to Minneapolis, she ends up seated next to a strange, paranoid, spectrum-dwelling young man named Elias, who accidentally takes her bag when they land (because they're identical). Clara is determined to seek him out because 1) he has all her stuff, and 2) he has drawn something in his sketchbook that relates to her past, when there was no possible way he could have known about it, and it's freaking her out.

When she finds him, he has no memory of meeting her at all. At least, for the time being - Elias has Dissociative Identity Disorder, so sometimes he's the sweet, charming Elias who had answered the door, and at other times, he's the Other One, the paranoid, erratic, artistic Elias who believes he lives in this other world called Salem.

Clara can't help but feel drawn to Elias, and as he spends more and more time as the Other One, Clara finds herself roped into his strange quest to find the Lightkeeper and bring peace back to Salem. Does that sound weird? Yeah, it should. But what they both find at the end of that trip is more than what they bargained for.

Mild spoilers and speculation ahead

This book. Blew. Me. Away. I'm writing this at 2am because I could not stop reading it. I wasn't sure what to think at first - Clara seems overly British (like, I feel like she speaks like how Americans think British people speak, which is not surprising, considering how Jonathan Friesen is American), and there were points when the story got so ridiculous that I was starting to think that she was really just an unreliable narrator and we'd eventually find out she was narrating the story from a hospital herself (a la Catcher in the Rye). I wasn't sure how I felt about it, but I kept reading anyway, because I couldn't stop. This book had me in a state of "WTF is this even," and I couldn't rest until I knew for how it was going to end.

It was a delicate balance, but I feel like Friesen managed to successfully write a character that is both unlikeable but not actually unreliable. Clara is highly flawed from the get-go, operating selfishly (leaving behind her two siblings for her father who has just gotten out of jail, and then jetting around the world using money donated to her by people who thought she was going to give it to charity, stuff like that) for the vast majority of the novel. Even with Elias, her main goal was to try and "fix" him by somehow getting rid of or absorbing the Other Elias so that she can finally be with the nice Elias. (That's some ableist ish right there, homegirl.) She is kind of a jerk.

And yet, we're with her on this journey. Maybe it was my own curiosity; maybe I wanted to see if she would learn anything from the experience. She kept hinting at her Great Undoing, and the fact that it was partially her fault that her father ended up in jail when she was 10. I don't like the girl, but I recognize that she is broken somehow, and maybe in the same way that she wanted to see if Elias could be "fixed," I suppose I wanted to see if the same was possible for her as well - maybe not to be "fixed," but to see if she could find peace with her past, the same way that Elias was seeking to as well.

All the meanwhile, it is QUITE the roadtrip adventure story. As they make their way east from Minneapolis, meeting interesting characters along the way, they chase the stars in search of the Lightkeeper, stopping at every Salem on the map. It's ridiculous, some of the things that happen to them, but ridiculously entertaining, and after a while, one gets the feeling that this journey might be more allegorical than literal, especially after one of the people they meet tells the story of Orion and how he came to be a constellation. I haven't parsed out the symbolism for myself quite yet, aside from what is explained in the book, but it made the trip that much more fascinating.

I have to say that I don't buy the "love story" very much, but I guess there had to be a greater reason why Clara continues to put up with Other Elias' outlandish requests. I'm not saying I don't think she loves him - she definitely cares about him and feels responsible for him, and Elias in turn "loves" her, but more that I think he relies on her and values her - but I never got any sense that their relationship was really going to go anywhere.

Well, spoiler alert, it doesn't. When they reach their final destination, a remote town near Camden, Maine, Clara learns the reason why Elias' subconscious has pulled them there, and while the story is not a happy one (nor is the ending, which drew to mind another Greek myth, of Icarus), Clara in the end learns that she and Elias were not so different after all, and thanks to all this, she can finally go home and reconcile with her past and her family.

Both of Me was at times dark, at times outlandish, at times touching, and at all times compelling. It was unique and quite stunning, and even though I didn't love the main character, the bottom line was that it really left an impression on me.
5 stars Jonathan Friesen YAF