Gates of Thread and Stone by Lori M. Lee 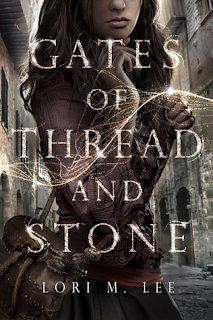 Seventeen-year-old Kai doesn't know much about her past. She has been living in the poorest district of the city of Ninurta with Reev, who found her at the river's edge when she was a kid and has raised her as if she were his sister ever since. All she knows is that she has the ability to manipulate time - and it's a dangerous secret to have, since no one in the entire city is supposed to have magic.

Her daily life consists of making mail deliveries for the White Court (the palace ruled by the all-powerful Kahl Ninu), visiting her handsome friend Avan, and taking care of Reev. Then Reev disappears mysteriously one day, and her world gets turned upside-down as she and Avan go on a quest to find him.

I actually have the digital galley for the second book in this series too, so I will be continuing on anyway :) If I didn't have to review it, would I read book 2? I'd have to say... maybe. I enjoyed the book, and I liked the story, but it didn't grip me. If you read a lot of YAF, particularly fantasy or dystopian YAF, then there are a lot of aspects of the story that you'll find familiar. But at the same time, it wasn't badly written, and if you're loosely interested in mythology/religious legend, you might find the concept of the Infinite intriguing - they're magical, immortal beings that rule the world: Death, Famine, Time, Conquest, etc.

I actually found the story quite Divergent-like. Kai has a magical ability in a walled-off, highly-patrolled city where being magical can get you in trouble. She's driven by familial love. She has to learn how to fight so she can participate in a competition (in order to find Reev). The guy who she has the hots for is a little older, more experienced, and has a really badass tattoo :) And when we finally learn about who she really is, it's a gamechanger.

I had a hard time placing the story - whether it was distant past or distant future. The names - Kai, Reev, Avan, Kahl Ninu, Irra, Istar, Kalla, etc. - along with the immortals of the Infinite made me think past, but the fact that Avan has an ancient relic from a past civilization that sounded an awful lot like a toaster of course makes me think distant future. (He puts flowers in it, because he's not sure what it does.) Although, given how Kai's power is the ability to manipulate time, perhaps this sense of timelessness is intentional. It didn't take me out of the story too much, but I felt like I was reading more slowly because of it - normally I rip through books like these, but initially at least, I found myself stepping forward tentatively, as if I wasn't really sure where I was supposed to be. Once we got into the swing of the story though, things proceeded apace.

It's a decent story, with likeable characters, though it exists in a market for a genre that is already quite saturated. If you love YAF books that are fantasy/dystopian and you feel the need to DEVOUR them, then definitely give this one a go.
3 stars dystopian fantasy Lori M Lee Netgalley YAF