Into a Million Pieces by Angela V. Cook 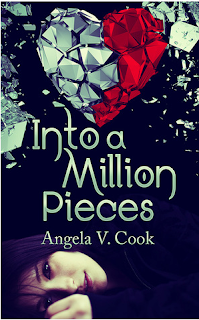 Allison, along with her twin sister Jade, is a succubus, just like their mother and her twin sister were as well - it's a family curse. They can't so much as kiss a man (or boy, in Allison and Jade's cases) without draining their life energy and rendering them bedridden, and at worst, as was the case with their parents, intimate contact would bring death.

Since their succubus powers make them exceptionally beautiful and attractive to men (as well as "addicted" to life energy the more they take it from others), Allison has decided to squelch her tendencies by dressing "goth" (like, "80's Cure fan" goth), hiding out at the library, and spreading rumors about herself that she summons demons and bites the heads off bats. Jade, on the other hand, has decided to fully embrace who she is, making out with tons of guys for a "fix" but stopping just short of doing any lasting harm. This is a constant source of anxiety for Allison, because even if Jade doesn't end up killing anyone, her behavior might raise a bunch of alarm bells once all of her dates start realizing that they've each ended up sick for days after kissing her. But after getting to know Ren, who works at the library, Allison starts to understand why the prospect of love is so irresistible.

When one of Jade's plans leads to tragedy, Allison gets closer to Ren as she tries to pick up the pieces in the aftermath, and as she deals with the danger of their feelings for each other, another danger threatens Allison's existence as well.

This was a fun, quick read - Allison is caustic and witty, and it was easy for me to like her and her voice because she's extremely relatable. And even Jade, who is less relatable, is still likeable once you consider some of her motivations (Misogynistic jock a-hole picking on her sister? Oh hell no, she decides!) and the fact that she's trying to make the best of a crappy fate.

I haven't read many other books about succubi - I've pretty much only read Richelle Mead's Succubus Blues series, which I really enjoyed - so I don't know much other than the basic mythology that is presented. For example, vampires in fiction have a number of different iterations, cultural symbology, etc., as do zombies. There are also a number of different books on various supernatural phenomena that are appropriate for different grade levels. Suffice it to say that I would imagine that most fiction involving succubi are going to contain sexual content, and that I probably wouldn't recommend it to young adults.

But I think that the figure of the succubus is such an important lens though which we can discuss the (literal!) demonization of female sexuality, and that that's an important concept to discuss with teenage girls. Society simultaneously wants you to be sexy and at the same time punishes you for being sexual. I like that Into a Million Pieces gives us an opportunity to have that discussion, because it is written as YAF. Allison and Jade are an interesting dichotomy - they both have the same literally-destructive sexuality, and yet the way they manage that power in such different ways is very interesting to analyze. (And it's also worth looking at the the lives of their aunt, who remains a virginal religious nut her whole life, and their mother, who pursued love and sex and ultimately was dealt heavy consequences, as well.)

The reason why I gave this book three stars instead of four or five is that it didn't feel very resolved. And I don't mean that I need books to wrap things up in a tidy package with a bow, but that I felt like there could be more - perhaps it could've been longer or there could be a sequel. The way it ends doesn't seem to make a statement one way or the other about the nuanced ways to look at female sexuality, though it does seem to condemn extremism on either end of the spectrum. In layman's terms, I wanted more. I want to know if Allison gets her happy ending. Or, I want to know if she doesn't get her happy ending. I think there is room for the continuing adventures of Allison and whether she learns more about how to manage life as a succubus and whether she meets other girls/women like her and what she eventually decides to do with herself. (Write a sequel please please?)

The other thing is the sort of mystery that we're presented with in the book, that very quickly gets resolved. (I won't describe further due to spoilers.) I guess this book was never meant to be a whodunit, but I think there was a good opportunity there that was missed :)
3 stars Angela V Cook Netgalley supernatural YAF