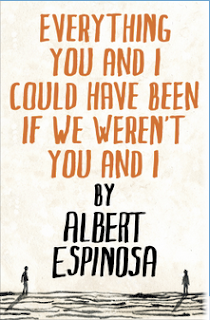 Note: This novel was originally written in Spanish, and I read it in translation.

Marcos lives in a world where people can take injections to stop sleeping. The night after his much-beloved mother passes away, he is on the brink of injecting himself when two seemingly-unrelated things happen to change his mind: 1) he is drawn to a girl he can see off in the distance from his balcony, and 2) he gets a phone call that an alien has been captured, and his police detective boss needs him to use his special gift to identify him. Marcos has the ability to look at people and see a whole lot about them: their extreme best and worst moments, as well as a bunch of other moments in between. And... yeah.

Did that summary seem abrupt? That's because this story is hard for me to explain. On the one hand, there's the meandering storyline about the alien and Marcos' gift and all the stuff happening in the now, and on the other hand, there is a whole lot of discussion of his recollections of his mother and her attitudes/beliefs about sex.

Because I read this book in translation, I have no idea if this is a brilliant, beautiful book that I just am not getting, or if it's an okay book that tries to do too many things (and also, the whole sex/love thing involving his mother makes me feel squicky, but I'm an American, and I know cultural attitudes differ). I'm leaning towards the latter. There ARE some gorgeously poetic snippets and moments, and then there are parts where I was like, "What even is going on right now?" I loved the backstory about the alien and what made him "alien" and all that, but I felt like it could've been developed more - there was a really interested theory at work there that ended up not feeling flat to me. The whole not-sleeping thing is really interesting too, but it didn't get talked about very much, despite the fact that the first few chapters are about him purchasing the injections. Like, what even was the point?

There are a lot of great ideas that are brought up in this book, but they just aren't pursued to their fullest potential. It's a shame, because I loved the poetic nature of Marcos' narration.
2 stars adult Albert Espinosa Netgalley scifi translated