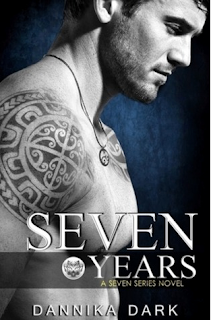 This is book 1 of Dannika Dark's Seven series.

Seven years ago, Lexi's brother Wes died, and her life hasn't been the same since. She's unhappy with her life - she's stuck in the town she grew up in, where memories of awful schoolmates (and sometimes even the awful schoolmates themselves) haunt her; her ex, who cheated on her in own car, won't leave her alone; and her father, who never really cared about her anyway, has left their family completely. Wes was the only protector she's ever known, the only person who ever took care of her and looked out for her.

Still shaken up by his death, she finds her world rocked yet again when Austin Cole shows up in her life again. Austin was Wes' best friend - he was a daily fixture in their lives as they were growing up, but after Wes' funeral, he took off and was never heard from since. But now he's back, and he's got something to tell her - he's a shapeshifter. A wolf shapeshifter, to be exact - he's a new Packmaster in town, and he wants to make things right.

The drama starts to avalanche, as Lexi learns that Wes' death was not an accident; that she too is a Shifter (and therefore, must have been adopted); and that her mother has disappeared, likely kidnapped by (whom she had previously thought was) her father. Lexi learns quickly that Austin truly takes care of the people he loves, and as he and his pack help her sort out the danger that is threatening her family, there is also the matter of their feelings to deal with...

I've been motoring through a bunch of romance novels lately because this is how I veg out. Some people go on Netflix binges; I devour romance novels. But I'm no aficionado; I just kinda read whatever sounds interesting (and is also on sale/free).

After a streak of books where I felt like the men were overly aggressive, needlessly rude, and/or assault-y, it was refreshing to read Seven Years, which featured a male character who did not behave like an uncontrollable animal - and he was actually an animal. Like, the alpha of his wolf pack. Not that there isn't an abundance of awful men in this book who grope Lexi in really disgusting ways, but those guys end up beaten to a pulp (and even dead).

And you know what's cool? It's not always Austin who gives the beatdown. Lexi is no shrinking violet, and even as a human, she is stubborn, strong, and unwilling to be controlled. And once she officially learns how to shift into a wolf herself, even then she's a badass.

The world-building in this book was really great. I definitely did not feel like Dark was trying to tide me over between love scenes by throwing in some filler dialogue. There is a well-built, really interesting universe at work here, and I had as much fun reading about pack life and shapeshifter society as I did about the development of Lexi and Austin's relationship.

In short, this is a book I'd be happy to recommend to others without embarrassment because there's an actual story here, and not just tenuously-connected love scenes.
4 stars adult Dannika Dark fantasy romance/erotica supernatural