Trouble is a Friend of Mine by Stephanie Tromly 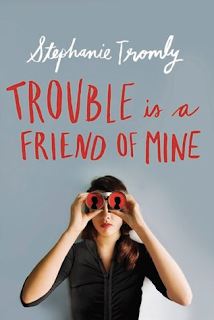 Zoe Webster has just moved to River Heights, following her parents' divorce. She doesn't really like it there, and it's difficult to make friends. The only "friend" she has is this weird guy named Philip Digby. She's planning to keep her nose to the grindstone and hightail it out of that town to attend a fancy private school so that she can eventually go to Princeton.

Digby shows up on her doorstep one day, and without so much as a polite introduction, he drags her into a whirlwind of crazy adventures. Digby has taken it upon himself to investigate the disappearance of a local teenage girl, and he's doing it his way, which happens to involve, for example, breaking and entering into a gynecologist's office (twice), snooping around drug dealers, and showing up in Zoe's window at odd hours of the night and scaring the bejeezus out of her.

Digby is infuriating, reckless, and often rude, but Zoe can't help but be drawn into his mission, especially after finding out that Digby's own sister had disappeared eight years ago. And as Digby continues to further unravel the mystery, the schemes start to get more ridiculous and dangerous.

What got me to read this book was that it was described as "Sherlock meets Veronica Mars," and I think that is pretty much the best way to encapsulate the spirit of this novel. Digby really is a cross between Cumberbatch-Sherlock and Veronica - he is sharp as a tack, relentless in his pursuit of the truth, and comical in his blunt observations of others. Normally I would have a problem reading about a (male) character who has such an astounding disregard for other people's boundaries, but for some reason, it comes across as endearing here. Not that you don't at times want to smack him, but you get the feeling that when he does lie or manipulate the truth or push Zoe into going along with him, he's not doing it for some slimy, nefarious purpose. And this persona that he has hides a lot of pain underneath, that he only reveals to Zoe in very rare moments. There is an oddly magnetic quality about Digby, and it's no wonder that by the climax of the story, he's got an entire posse involved in his quest.

And Zoe is a fun narrator - I guess, in keeping with the comparisons, she's the Dr. Watson/Wallace Fennell figure. Digby exasperates her to no end, but she's clearly fascinated by him. He takes her out of her comfort zone, sees her in a way that even she doesn't see herself. They have this great chemistry together, and their bickering made me snicker on so many occasions - they're pretty hilarious! Digby seems to be oblivious to how frustrating he is, and Zoe is unafraid to snark at him, and together, they are a really fun pair.

As far as the mystery itself... well, I'm not even sure I know how to describe it without spoiling anything, but let's say that it's compelling, totally over-the-top, and SO. MUCH. FUN. I haven't read anything like this in a while, and I completely loved it. I would be over the moon if there were sequels, because I totally want more Digby and Zoe.
4 stars Netgalley Stephanie Tromly YAF