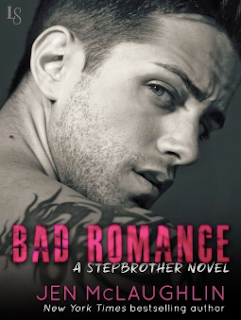 At 18, Jackson had it pretty bad. His mother never really wanted him anyway and never bothered hiding that from him. Her latest husband, Walter Hastings, is the biggest rich-guy bully ever. The only person who seemed to care about him was his step-sister, the beautiful, sweet Lily.

Seven years later, Jackson is back in town, after a kiss with Lily that had his step-father send him packing. Jackson is home after getting wounded in battle, and life has changed him - but the one thing that hasn't changed is his feelings for Lily, who wrote to him every week while he was gone.

Lily has problems of her own - having been a Good Girl all her life, she is allowing her father to push her into marrying someone she absolutely detests, because it means saving his company and the thousands of employees who work for him. When Jackson's re-appearance in her life stirs up some old feelings, she has to decide if she wants to go after what she wants and live with the consequences.

So... this book was okay. It wasn't great, but it wasn't terrible. I think my biggest issue with it was that the "bad" characters were cartoonishly bad - in particular, I think it was a missed opportunity not to make Derek, Lily's awful fiance, more three-dimensional. He's not eager for this marriage either, because he's gay - and instead of making him a toxic, douchey a-hole anyway, the story could've had him be more complex, more interesting, because of the difficult situation he finds himself in.

But nobody reads romance/erotica for complex side characters, right...? So who cares about Derek? Let's talk about the couple.

I found myself debating Lily's situation a lot - on the one hand, how could she not realize that her father's company is not her responsibility? It's not her job to save thousands of employees. On the other hand, I realized that maybe her father's treatment of her is pretty much abuse - the way he's manipulated and controlled her her entire life - and you know what? It's not that simple when it comes to abuse. It's not my job to judge how Lily makes the best of an abusive situation.

But you also know what? That was my interpretation of her family situation. I don't know if McLaughlin meant for the reader to realize that Lily grew up with an emotionally-abusive father, or if we were really just supposed to just write him off as a cartoonish, mustache-twirling rich guy. And for all his frustrations and crap that he's had to deal with, I don't think Jackson sees it as abuse either, because he does rather give her a really hard time about the situation she's stuck in. And that kinda rubbed me the wrong way.

The thing is, I felt like there was some awareness of this (the issue of her agency in an abusive situation) - the climactic moment of the story (pun not intended) is when Lily and Jackson are caught in the middle of an intimate moment at her engagement party, and this of course leads to Derek calling everything off. And Jackson even SAYS to her, "I'm sorry I took away your choice in this." All this build-up to "Will she or won't she?" and instead of giving her the opportunity to have a character-defining moment and exercise some sort of agency, that choice is taken away from her. And yeah, I know, she decided to have sex with him, but it's not the same thing, because she was going to walk back out there after they were done and still marry the dude, for all we know. And she decides to tell her father off after all this happens (and he's been shouting at her abusively for an entire day), and she finally gains her freedom, but it's still not the same thing, because by then the ball has already started rolling. So in not giving her the opportunity to make her decision about Derek, the narrative itself is no better than her father.

So, I don't know. This book was okay. The fun parts were fun, and the sexy parts were sexy, but there was potential for dealing with some very real issues and they just weren't dealt with. But I guess it just isn't that kind of a story. *shrug* Shame...
2 stars Jen McLaughlin Netgalley romance/erotica