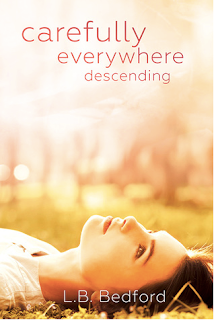 Audrey comes from a poor family in a poor neighborhood, and she is extra-dedicated to academics because that is her only ticket out of her life after high school.

Scarlett West is beautiful and wealthy, and needs help bringing up her grades. Despite some past drama between the two, Audrey agrees to help her, and against her better judgment, she finds herself more and more preoccupied with thoughts of Scarlett. Despite their different backgrounds, there is an undeniable attraction between the two, and both girls find themselves conflicted about whether or not to pursue a relationship with each other.

Meanwhile, Audrey is also preoccupied with her mysterious new neighbor whom she is convinced might be a serial killer. Again, against her better judgment, she keeps formulating plans to find out who he is.

Really, Audrey seems to have issues with her judgment.

I wanted to like this book. It was okay, but it could've been so much better, and I think that it didn't at all need the side plot about the neighbor. Like, at all. The story of her and Scarlett would have been enough of its own story, but in including both plots, the book just kind of felt flat.

I loved how natural and no-big-deal their attraction felt. There were no big "By the way, I am gay" announcements from Audrey - you find out how she feels because she keeps talking about how gorgeous Scarlett is and how attracted she is to her, just like in a book with a hetero romance. (Right? I mean, there are never any "By the way, I am straight" announcements, because... straight privilege, straight-as-default, etc.) In fact, even though the attraction is clearly communicated for a while, there is no mention of the word "gay" for quite some time, and I honestly started to wonder if maybe the story had initially been written with a hetero pairing in mind (and then all the gendered references got changed later). Like, early on, Audrey and Scarlett are arguing in a car in front of Audrey's house, and when Audrey finally goes inside, she discovers that her father had been watching them. He's really suspicious of Scarlett's intentions and kind of upset with Audrey about them being out there for so long in the car. And maybe this is my own ignorance showing, but I thought, I've seen fathers (in media and in life) get upset like this about their daughters sitting in boys' cars, but I've never seen that happen with girls. In fact, I'm surprised that he was suspicious at all - I guess in our heteronormative society, the first assumption wouldn't be that they are potential romantic interests.

So clearly, there's a lot of unspoken backstory about how Audrey probably came out to her family a long time ago, and they are so accepting of it that it's not even a thing anymore, and apparently they treat all new girls in Audrey's life as potential romantic interests. I thought this was really interesting and actually really refreshing, and it made me question my own assumptions and worldview as I was reading it.

One thing that wasn't cleared up for me was why Audrey's older brother was so suspicious of Scarlett in particular. It's mentioned early on that he was bullied/attacked for being poor when he was in high school, and that's not the sort of thing you just get over, but it felt like he was particularly against the idea of Audrey hanging out with Scarlett, and I wondered if it would eventually be revealed that Scarlett's older brother (who is briefly mentioned later in the book) was one of the attackers or something. Spoiler alert: it isn't.

While I definitely enjoyed the romantic tension, it wasn't really an eventful plot. I enjoyed the FEELS, but there wasn't really an eventful drama. There was a hint of Audrey learning how difficult and complex romantic relationships are, but not enough for it to be the full focus of the story. Like, this could've either been a great, dramatic love story, or it could've been a great personal-journey character study for Audrey, but it ended up being somewhere slightly in the middle, and as such, not super exciting, aside from the cute romantic parts.

Which, I suppose, is why there's the whole mysterious neighbor part. This is probably my biggest objection to the whole story - why is it even here? I mean, sure, it led to an action-packed climax to the story, but it didn't further the romantic plot any - she was already about to go out on a date with Scarlett. Their ship was already sailing. It added nothing to the story of Audrey and Scarlett, aside from letting Scarlett be a hero, I suppose? I don't even know.

By the way, the climax wouldn't even have happened if Audrey hadn't been snooping around business that wasn't her own. EVERY person she mentions this neighbor to, they're like, "Um, if even you think he could be a serial killer, then shouldn't you stay AWAY from him?" But she keeps persisting stubbornly. And I'm not saying she deserved what eventually happens, because no one deserves to get hurt, but there was a direct cause-and-effect between her actions and what eventually happened.

And the denouement leaves much to be desired. It felt abrupt. Did Audrey learn anything about being nosy? Will she and Scarlett be okay? Will her family be okay? What's going to happen to the neighbor? Was there any growth or change at all? It just kind of ends.

So, two stars. Because there was one thing that was done well, and a lot of things that were... not done so well.
2 stars LB Bedford LGBTQ Netgalley YAF