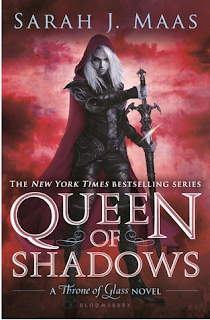 This is book 4 of the Throne of Glass series, so my post assumes that you've read the first three, as well as the novella collection Assassin's Blade. To read all my Sarah J. Maas reviews, click here. This review contains spoilers for all the previous books as well as this one.

Previously on Adventures of a Badass Female Assassin...

Aelin Galathynius has come home at last. Well, sort of - the long-lost queen of Terrasen has some business to take care of before she can truly return home: she needs to find the third Wyrdkey, which happens to be in the possession of her former master, Arobynn Hamel; she needs to avenge the wrongs committed against her by Arobynn; she needs to rescue her cousin, Aedion Ashryver; she needs to destroy the disgusting Valgs, which are growing in numbers; and she needs to kill the King of Adarlan. Oh, and magic is still being suppressed on the continent, so she needs to find a way to bring back magic too.

In another area of the continent, Manon Blackbeak, heir to the Blackbeak coven and newly appointed Wing Leader in charge of the Ironteeth Witches, is dealing with some nefarious forces at work involving the creation of some disgusting creatures. She is torn between following her (cruel, cutthroat) Matron's orders and doing what is right for her coven as she is called upon to sacrifice her sister witches for some truly heinous experimentation.

Their stories will converge as the King of Adarlan sets his plan for world domination in motion.

My summary really does not do this book justice, because really, this book was EPIC AF. I keep using the word "epic" over and over to describe this series, and that's because just when I thought it couldn't get any more huuuuuuuuuuge, it just keeps on cranking up the action.


Oh my god. OH MY GOD. I can't remember the last time I slammed through 647 pages IN ONE DAY, but once I started this book, I literally couldn't stop reading it. It took me a whole day (stopping only when I actually had to, like, do responsible-type things), but I knew I couldn't rest until I finished it all.

I actually did not start reading this the day I received it, and that's because I decided that I wanted to re-read Heir of Fire before I read this one. Mainly because it's been a while, and the details are pretty important in this rich of a story, but also because I didn't really pay attention to the storyline about the witches the first time through, and I really wanted to give it its proper due, as well as be caught up for the eventual moment their storylines converged. I'm really glad I did this, because I would've been so lost.

So Queen of Shadows revolves mainly around a badass assassin and a badass witch with iron teeth and claws. EXCELLENT.

Aelin/Celaena is truly an amazing character. Not just because of the way she kills, but because her brain is constantly ticking, and she's always several steps ahead of everyone, including the reader. I look forward to re-reading this book at some point, to look for the subtle hints that Maas gives to indicate that Aelin is up to something.

I appreciate the way her character has grown and changed, as well. She went through some pretty brutal emotional moments in Heir of Fire regarding her past, and her new maturity and acceptance of her responsibility as Queen really shows through. But at the same time, she hasn't fully let go of her identity as the lethal killing machine Celaena. It's always going to be a part of her, and it was a joy reading about her doing what she does best.

Her core group now consists of Rowan (who came with her from Wendlyn), Aedion, Chaol, his friend Nesryn, and Lysandra, who grew up alongside her in Arobynn's Keep as a courtesan.

Her reunion with Chaol was painful. Chaol had been through a lot while she was gone, and he had had to face up to some feelings of resentment he'd been harboring as well as his own guilt over what happened to Dorian, and of course, Aelin will never be able to forget his role in the death of her friend Nehemia. So, no love lost here. (No, wait... a LOT of love lost there.) There is too much between them. For those of you who ship her and Chaol... sorry, but that ship has sailed. It was fun while it lasted, two books ago.

A big part of this has to do with Rowan. I know in my review for Heir of Fire, I wrote that I was glad that Celaena finally just had a strong platonic relationship with a male character, instead of having it turn into yet another fiery romance. Well, I lied. After rereading it and then reading this, I realized that I SHIP HER AND ROWAN SO HARD. There's a slow build to their romance in this book, and I totally loved it. After the end of the last book, she departs for home without him, so they're separated for several weeks, and when he shows up on her streets, it's a pretty sweet reunion, and we realize that their trust and care for each other run deeper than just warrior protectiveness. Their feelings for each other are rooted in their unbreakable bond, and what starts as some playful teasing ends up turning into some pretty smoldering moments. Rowan made me blush. SEVERAL TIMES.

I was especially pleased to see the friendship between Aelin and Lysandra develop. I realized that not since Nehemia has she had a strong female friendship, and I really wanted there to be one, so that Aelin wasn't just only dealing with guys all the time, especially since there is only one guy that hasn't been romantically involved with her, and that's only because he's her cousin. Lysandra was always a rival to Aelin for a long time, and I was glad to see that they become allies and really good friends.

Speaking of romantic entanglements, Prince Dorian is, for most of the book, under the control of a Valg prince. In Heir of Fire, his father snapped a black collar on him that would force him under his father's control as well as cause him to be inhabited by a demon prince, and there are some chapters from his point of view that are kind of painful, because you're rooting for him to pull through.

I found all the witch stuff much more interesting the second time around, and I guess Manon is an interesting foil to Aelin because she has no romantic plotlines and all her "friendships" (for lack of a better term) are with women, whereas Aelin is usually mostly surrounded by men, whether friends or enemies. Manon is forced to supply her sister witches to the Duke of Perranth to be evil demon baby breeders, and that was a really hard thing to read, because of course it's awful and traumatizing to read about how it all happens. Her story brings in two names from the past - one being Kaltain, who was a courtier in Adarlan, and in the first two books, we saw her manipulated and then imprisoned. She too has an evil collar, and the Duke, in addition to abusing her (and god knows what else), has been training her to hone her destructive power of shadowfire, essentially turning her into a weapon under his control. The other character is Elide, who was the child of Aelin's mother's lady-in-waiting - with both her parents dead, her evil uncle has taken her to the duke also to volunteer her as an evil demon baby breeder. Manon finds herself in a difficult position as the leader of her squadron, knowing that all this bad stuff is going on, but feeling handcuffed by her grandmother, who demands her obedience.

Aelin and Manon DO meet in this book briefly, and it's not even the climactic battle, but it's pretty damn awesome, and leads to a tentative alliance. I cannot WAIT to see them eventually fight on the same side. (Because that has to happen, right? RIGHT? So I can root for them both?)

So... there is a ton that happens in this book, and I think that if it were to be made into a movie, it would have to be split into, like, three movies, because every time we hit some sort of major event, there was still a few hundred pages left. I found myself constantly thinking, "What ELSE is there left for Aelin to do??" Especially since there are still a couple more books in the series! Two major things are wrapped up in this book through the deaths of Arobynn Hamel and the King of Adarlan. Seriously, they both die, pretty spectacularly. There is still the Duke to take care of, and all his sordid plans, but for now, the threats that have been looming for the past few books are taken care of in this one, so I'm REALLY curious to see what else is in store.

The stories are so rich, the characters are so interesting, and it's pretty... epic. It's absolutely grand. I can't wait to see how everything turns out.
5 stars fantasy Sarah J. Maas YAF