First & Then by Emma Mills 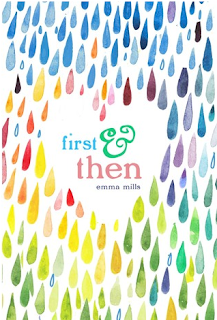 Summary: Devon Tennyson admits that she leads a pretty unremarkable life, and that's probably why she's having trouble thinking of what to put in her college essay. She's perfectly happy not getting involved in extracurricular activities, hanging out (and crushing on) her best friend Cas, and avoiding thinking about the future. But as her senior year begins, her younger cousin Foster comes to live with her family and demonstrates a remarkable talent that makes him an unlikely athletic star. Finding herself spending more and more time around surly football hero Ezra Lynley, Devon starts to learn that she's not as ordinary as she once thought either and that no one is simply how they seem on the surface.

Thoughts: This book was billed as "Pride and Prejudice meets Friday Night Lights," but I don't think I would describe it that way. I mean, yes, there are lots of Jane Austen references, since Devon is an Austen fan (high five!), but I think it's key to note that the book she is reading/discussing most of the time is Sense and Sensibility, and I think that's the more important comparison, because in First &Then, the familial relationship between Devon and Foster is as important, if not MORE important, than the romance between Devon and Ezra.

Ezra is Darcy-ish in the sense that he is "above" everyone else (as the town's football star) and it makes everyone think he's a jerk. By his own admission, he's bad at talking to people, but he doesn't seem to mind Devon and Foster.  But I think that's where the P&P similarities end, for me.

Their love story is definitely a slow burn, but again, I think that's because the more central "love" story is between Devon and Foster, as Devon learns to accept him and care about him like a brother. Foster is kind of an oddball, the type of kid who has trouble understanding figurative statements or holding in inappropriate comments, and at the beginning Devon only sees him as a pest, a burden. She has to drive him everywhere, keep an eye on him all the time, curb any oddball statements he might make. When Foster earns a spot on the varsity football team, becoming the only freshman ever to do so and becoming an unlikely celebrity on campus, Devon at first has trouble seeing what everyone else sees, because to her, he's still just her annoying tag-along cousin. But the more time she spends with him, the more she comes to care for him, because the circumstances of his being there are actually quite painful and difficult for him, and she learns to see past her first impressions of him.

To be honest, there is a lot in this book about overcoming assumptions and first impressions. Yeah, yeah, okay. So it's more similar to P&P than I thought :) But make no mistake, it's not a straight-up adaptation. It takes things a step further than that.

This book was cute without being overly cute. It involves football, but it's not overly football-y. There's no insta-love and no "speshul snowflake" thing going on, and each of the main characters (and even some of the side characters) is nicely fleshed out and complex, and seems to have rich inner lives. Like Devon, it appears to be ordinary on the surface, but once you dive in, you learn that it's actually quite remarkable.

Bonus points: look at what the book looks like, underneath the book jacket! 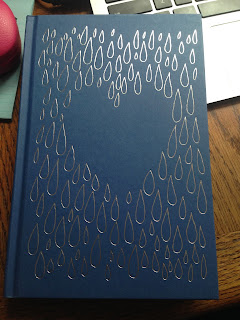