Irresistibly Yours by Lauren Layne 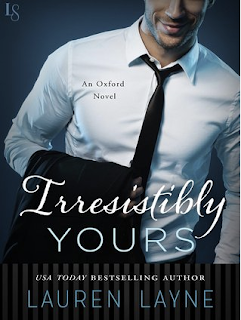 Summary: Cole Sharpe is a shoe-in for the new Senior Editor position at Oxford magazine - he's been a freelance writer there for quite some time, and he's good friends with all the guys (and the ladies as well!) - but things take a turn when he finds out that he actually has competition, in the form of Penelope Pope.

Penelope recognizes a charmer when she sees one, and Cole is definitely a charmer. Despite being competition, they hit it off immediately and become friends, the ladies' man and the tomboy. But as their attraction and connection become undeniable, they both have to decide whether an office romance is a good idea.

Thoughts: This book was absolutely good fun! What I really loved about this pairing was that Cole and Penelope have a good friendship as well as romantic connection - some of my favorite parts were actually the scenes of them bantering. It made their romance feel more real, rather than "Oh my god, inexplicable rush of blood to my lower body whenever they're around!" Their attraction felt very organic to me, especially from Cole's perspective. Penelope isn't a "hot piece of a**" whom he eventually learns is actually a cool person - she's a cool person to whom he becomes more physically attracted as he gets to know her. Which feels more real to me, or at least feels different from other romance novels. On the other hand, Cole is the "hot dude" from the get-go, but I like that Penelope isn't intimidated by him in the slightest - in fact, she challenges him and doesn't cower. It makes for a fun dynamic between the two of them, and I thought that was the best thing about the book, even more than the love scenes.

I found it interesting how the book really flirted with (pun not intended!) a couple of tropes that I'm not a big fan of, but manages to avoid actually going there. The first one is the whole "You're/I'm not like other girls" thing, which to me seems to uplift some women at the expense of others. Penelope can spout off sports stats, drink beer, and chow down stadium food with the best of the guys, and she even looks different - Cole's usual "type" is blonde, leggy, and busty, whereas Penelope is dark-haired, short, and waify, which does make her different, but it's never framed in a way that puts down traditionally feminine women. In fact, Penelope makes friends with the group of "traditionally-feminine" women who work for the women's magazine next door in the same building. (Apparently this book is the first of a new series - the Oxford series - that is a spinoff of a series about those women and their dudes, the Sex and Stiletto series.) Cole likes how different she is from "other women" and how comfortable he feels around her, and ultimately that is the draw for him, but I'm glad that "other women" weren't being put down in the process of characterizing Penelope.

The other trope, that I hate even more, is the whole "You don't know you're beautiful, and that's what makes you beautiful" thing. For a whole discussion of why, please go here. While there definitely is an aspect of this with Penelope, I got the sense that 1) this is the direct result of a recent heartbreak (which is talked about in the story) rather than just being a general self-esteem issue, 2) Penelope seems to be okay with who she is, and 3) her inability to see her own sexiness is not why Cole is interested in her anyway. (Like I said, this book flirts dangerously close to the line, but never actually crosses it.) Penelope is cool being the "one of the guys" girl. She recognizes that she doesn't meet society's standards of conventional beauty, but hey, she's not dwelling on it - she's got a career to launch. What makes her beautiful to Cole is not the fact that she doesn't know she's beautiful; what makes her beautiful is the fact that she just. Is. Awesome.

I really enjoyed this book, and it makes me want to read Layne's other books as well. It just goes to show, good conversation still makes a difference :)
4 stars adult Lauren Layne Netgalley romance/erotica