My Bittersweet Summer by Starla Huchton 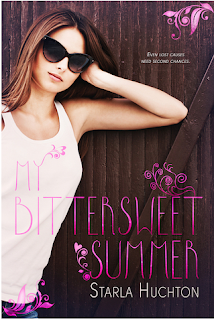 Summary: It's the summer after graduation, and Margie is getting ready to go to Paris for college to get a degree in management and then to go to culinary school when her parents drop the bomb that they will be returning to the small wealthy community where she grew up, bullied to the point of inducing PTSD and requiring six years of therapy.

She is determined to avoid any run-ins with her childhood bullies when she finds out that she will be working alongside one of them, the handsome and wealthy Zach Robinson, for the summer. Zach swears that he's not the same person anymore, and that he's trying to be a better person after the death of one of his friends. Fighting him every step of the way, Margie eventually comes to realize that if she deserved a second chance, he should too.

Thoughts: I can't remember what originally made me purchase this book, but it's been sitting on my Kindle a while, and when I recently noticed that Gail Carriger had given this a 5-star review, I knew I had to give it a shot.

I like that this book really emphasizes the awfulness of bullying. It wasn't just some schoolyard shoving around or name-calling - among other things, they used to throw dead mice at her. She suffered a near-fatal head injury trying to escape her tormentors. Since it's narrated from Margie's point of view, we see how her memories and encounters with familiar faces and places trigger panic attacks, rage-blackouts, migraines, and stress-vomiting. We see her coping tactics, how she talks herself down. Given the seriousness of her PTSD, it's no wonder that it's really hard for her to trust Zach.

What I particularly liked is that the book doesn't romanticize Zach's initial efforts - or at least, it minimizes that urge. He starts showing up unexpectedly, surprising her (and sometimes triggering her anxiety), he follows her around, he doesn't leave her alone when she asks him to - and she calls him out on it. She tells him he's being a stalker, and she doesn't think it's cute. When he does finally manage to win her trust, and then promptly loses it, she tells him that if he wants to win it back, he needs to let her dictate the terms, and he needs to give her space. And he does. She says that he is not entitled to her time, that she does not owe him her forgiveness, and that actions speak louder than apologies, and he listens. It's not his persistence-at-all-costs that eventually wins her over (which we see in SO. MANY. STORIES!), but the fact that he starts actually engaging in his own personal journey of change (which we only get to see from her point of view, but we truly find out that he's doing this for himself even more than for her). He finally, finally gets it. And then they become friends.

And yes, a romance does develop between them, and while I enjoyed it, I loved that it was rather... incidental? Zach's initial motivation for specifically trying to make it up to Margie is not because of romantic interest, but because she was the one that his group of friends tormented most, and he tells her that if she can give him a second chance, then the rest of the world will be a piece of cake. (And then along the way, he falls in love with her.) I found the epilogue to be a little corny, but I enjoyed it nonetheless.