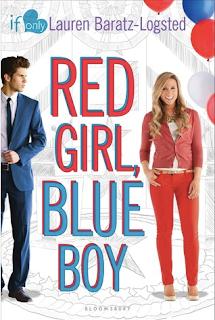 Katie Willfield and Drew Reilly are of course destined to be enemies, as her father is the Republican candidate for President, and his mother is the Democratic candidate. Also, they seem to be complete opposite - Katie lives and breathes politics, while Drew just wants to be a normal kid.

But when a morning show interview throws them together, sparks fly between them, and as Katie helps Drew adjust to life in the spotlight, Drew helps Katie loosen up and be a normal teenager. However, things get interesting when the media catches wind of their relationship right when they break up, and things get even more interesting when both parents want them to continue their relationship for the cameras. (This story is told in alternating viewpoints.) Spoiler alert: You won't know who wins the election.

So... I felt like this book had a lot of potential. The prologue is really, really cute, and I love a good opposites-attract love story, but there were some things that kept me from loving it.

For one thing, Katie is really, really annoying. And I'm not just saying that because of her political affiliation; it's her personality, and a combination of the fact that she is soooooo spotlight-obsessed and moony-eyed about the election, and the fact that she is totally clueless and takes things so literally (and not in an autistic spectrum sort of way, which I would not find annoying, but in an "I've been a sheltered rich girl my whole life, so I don't know understand you mere mortals" sort of way). And I really couldn't tell if we were supposed to dislike her or not. Logic would dictate that we should find both the leads in a book compelling, but Katie wasn't at all compelling, unless you count compelling me to roll my eyes. (And you know what? 89 Walls also had a Republican-Democrat romance, and the Republican girl was waaaaay more likeable.) And it was strange how the dislike struck me, since I was fine with her for the first chapter or so, and then it was like, all of a sudden, the Annoying Switch flipped on.

And it's not like Drew was extra likeable in contrast. He wasn't unlikeable either; he was just regular. I didn't get the feeling that the author was expressing her own political views in her characterizations. Though, I suppose, we are given a little more about Drew's family and their conflict and Drew has a cool best friend. whereas Katie has no friends and a different type of family history... I don't know. I really don't think that this characterization of Katie was about political affiliations more than just plain old personality type.

I felt like the main drama of the story was not so dramatic. The parts where they have to pretend to be together again weren't really all that fraught with tension or anything. Not that I think real-life relationships need to be fraught with tension, but it just didn't seem like that big a deal.

The book was okay. There were things I would've done differently, but I'm not an author, so what do I know?
2 stars Lauren Baratz-Logsted Netgalley YAF