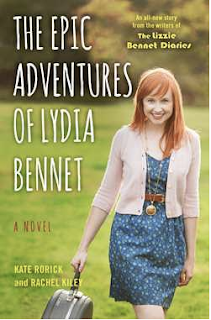 I'm filing this under "book to movie adaptations," though it is actually a book and not a movie. This is because it's a sequel to a book based on a series that is an adaptation of a book. Wow. That sounded complicated.

Pride and Prejudice is my number one favorite book. The Lizzie Bennet Diaries is a modernization of P&P, and is framed as a series of vlogs posted by Lizzie, who is a 24-year-old grad student getting a degree in Mass Communications. Her life consists of her two sisters, Jane and Lydia; her best friend, Charlotte; and her upcoming senior thesis project. And then all of a sudden, rich med student Bing Lee moves to town, with the even-richer William Darcy in tow, and everyone's life changes. On camera. On the internet.

Full disclosure: I am a SUPER fan of this series. I mean, not super enough to have befriended the cast members and creators, but some of them actually know me on social media, which is pretty cool :) This series was more than just a great adaptation - it profoundly changed the way an audience can interact with and influence the story. It was groundbreaking, and it earned a Creative Arts Emmy for its amazing transmedia storytelling elements.

Aside from just being very smart and clever, LBD took some elements of P&P and drove them in a completely different direction - case in point, Lydia Bennet. I mean, I love the primary story of Lizzie and Darcy, but what LBD did with Lydia's character had never, ever been done before in the history of P&P adaptations (that I know of), and that was to make her a likable, flawed, complex character whom we end up rooting for in the end.

Spoilers for The Lizzie Bennet Diaries and its related books below. I'm going to discuss LBD for a while, so keep scrolling if you want to skip that.

Traditionally, Lydia is the character that we write off really quickly as being spoiled, selfish, and self-indulgent. In the book, she runs off with Wickham and never learns a damn thing, and it seems like she never will. We hate her, sort of. I mean, she's annoying.

But in LBD, she's so much more than that. Thanks to giving Lydia her own side-plot with her own vlogs, we get to see certain things from her point of view. While Lydia is incredibly flawed and can be rather short-sighted and irresponsibile at times, we can also see that she, as the youngest Bennet, has grown up in the shadow of her two sisters, one who is incredibly beautiful and the other who is incredibly academic. Lydia knows she will never match either of them, so she takes a completely different tack and acts out instead, partying a lot and sleeping around, since that is one sphere that her sisters will never occupy, and therefore she can be the superlative in that area. Her wild behavior is not born out of selfishness necessarily, but out of an intense need for love and approval, for someone to finally see her as "good enough."

Someone finally does, and that someone is George Wickham. Or so she thinks.

Before LBD was ever in its beginning stages, I used to wonder how a modern P&P would handle the Lydia/Wickham elopement. These days, it's not nearly as big a deal for a (consenting adult) woman to have premarital sex, so what sort of earth-shattering, future-destroying thing could serve as the equivalent for modern times?

By this point in the series, I was finally caught up and watching everything unfold in real time, as the episodes aired, so along with everyone else who followed the show, I could only watch in horror as Lydia chronicled the beginnings of her relationship with Wickham, as he emotionally (and even physically) isolated her from her loved ones and manipulated her into trusting him. (And yes, that is called abuse. Lydia was in an abusive relationship.) We watched as once-wild Lydia's clothing choices got more and more gray, her spirit more and more subdued. The day the news of their sex tape broke, our hearts broke for her as well.

But whereas Book-Lydia fully knew what she was doing and was along for the ride, LBD-Lydia had no idea that Wickham had decided to sell the rights to their tape and to solicit subscriptions to make money off their intimate moment.

The thing is, while this sex tape did indeed break up Lizzie's fun times at Pemberley (Digital) with Darcy, and while the aftermath did cost Jane her job, the person whom this destroyed the most was Lydia. And this is not how it goes in the book. This event sets Lydia's character on a trajectory that has never been done before in a P&P adaptation, because for the first time (probably ever), we feel for her, and we know that she's not going to end up with that bastard. (Seriously, LBD-Wickham disgusts me so much that I can barely rewatch the episodes he's in.)

The series wrapped with Lydia going to counseling and being on-track to figuring things out for herself, but that's it. Her story ends. If you look up her vlogs, the last one she posted is the one right before she finds out about the tape, where she declares that she loves Wickham and that she finally feels good enough for somebody. That's it.

After being put through the emotional wringer, we all wanted something more for Lydia. I mean, we all wanted more, PERIOD, but we definitely wanted to know what was going to happen with Lydia. We fans had spent a year interacting with Lydia Bennet as if she were a real person (transmedia!), and to have her just kind of fade out of the limelight felt wrong. We had grown to care about her, and we wanted to know if she would be okay.

About a year after LBD wrapped, we got The Secret Diary of Lizzie Bennet, which is the story of the series, but with extra, since Lizzie writes about things in her diary that she didn't include in her videos. Written by Kate Rorick and Bernie Su, it's additional "canon" - we get to find out about certain things that happened in the series that we wouldn't have otherwise gotten an explanation for, such as the fact that Lydia and Mary were planning to move to San Francisco and room together while Mary does financial work for Lizzie's new media company, and Lydia works toward a psychology degree. (You can see my uber-short writeup here in this post from my old blog.) So that's something.

So NOW (sorry, after my long essay), we have The Epic Adventures of Lydia Bennet, written by Kate Rorick and Rachel Kiley (who wrote most of the Lydia episodes). Whereas Secret Diary stuck to the series (and therefore, the original P&P story), Epic Adventures is completely new stuff. I guess you could liken it to fanfic, but it too is "canon."

It's not written in diary format or anything - it's Lydia's first-person narration. It picks up the summer after the series concludes, and details Lydia's tentative next steps of finishing her Associate's and getting ready to transfer to Central Bay University to study psych, as we learned in Secret Diary.

But things don't go as planned, as she struggles with counseling, grades, and people who have preconceived notions of her. At first things are going fine as Lydia throws herself into her school work, but as old friends and new men enter the picture, things become complicated, and Lydia finds herself sliding back into her partying ways as the pressure and hang-ups build and she behaves irresponsibly again.

As hard as it was to read, it was entirely realistic, in my opinion. Of course it wasn't going to be smooth-sailing for Lydia. She's still grappling with a number of issues and feelings after the whole thing with Wickham, and it's natural that she would have difficulty figuring things out. It is frustrating, but it shows just how far from "okay" Lydia really is, and how much growing she still needs to do.

And that part was done beautifully, I thought. I absolutely adored the part where Lydia is visiting Jane in New York, and Bing takes Lydia to visit the teen crisis center where he works. Because, first of all, quality Bing and Lydia time??? Heck yes! And second of all, because she learned something from the experience that she couldn't get from all the studying she was trying so hard to do while finishing up her AA.

The number one question on all of our minds (aside from WILL WE GET TO SEE LIZZIE AND DARCY BEING CUTE???) is, Will Lydia ever find closure when it comes to Wickham? And the answer is yes. I was really surprised that it actually happened, and I was really pleased with how it happened, because while there was a standoff where Wickham was every bit the a-hole we expect him to be, it ended on a surprising note, one that I thought was very pivotal for Lydia's self-empowerment, and it wasn't a dramatic, violent gesture. (I know, some of us were hoping for violence, but that's not what happens.)

I really liked this book because I feel like I can rest easy now, knowing that we've left Lydia in a good place. It really was like checking up on an old friend. Lydia's going to be okay, you guys. I got teary-eyed just writing that. Even if we never get any more books or vlogs, we can now know that our girl is going to be okay.

And the fact that we care so much what happens to Lydia Bennet? Is a testament to the awesomeness of The Lizzie Bennet Diaries.  Yessss.

Some (spoilery) fangirl observations, for those of you who are already fans like I am:

Please don't let this be the end.