Taking It Off by Claire Kent 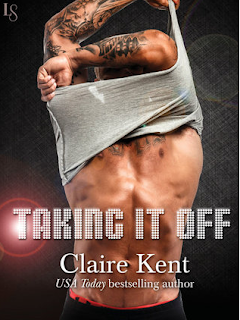 Summary: Preschool art teacher Elizabeth Marks is not having a great time at her friend's bachelorette party. She's really just not into male strippers.

She catches the attention of the club's owner, Matt Stokes, who seems to have her pegged instantly as the "perfect princess" who needs to shed her facade as well as her fantasy of the perfect life with the perfect man. It's just as much of a fantasy as anything that happens onstage at the club, he tells her. He challenges her to let loose, and in the weeks to come, they develop a tryst that starts to become more than just physical the more they get involved.

But she's the rich daughter of a potential gubernatorial candidate, and he's a strip club owner with a troubled past and a drug addict mother, and any prospect of a serious relationship between the two of them seems like a hopeless fantasy as well.

Thoughts: I actually relate a lot to Elizabeth's feelings about male stripping at the beginning of the book - the reason why I have zero interest in watching any of the Magic Mike movies or seeing anything like that in person is because it just isn't my thing, and I think that a body needs to be more than a body in order to be truly sexy. A person needs context.

I don't think this book has changed my mind at all, at least on that particular point - instead, it seemed to prove Elizabeth's point, as she only enjoys the experience when she's watching Matt dance or once she has started going enough times to get to know the regular staff. But I did think that some of the perspective he offers her about what it really means to dance (which can be applied to both male and female dancing, I think) and the fact that it's not any more ridiculous or different from her fantasy of "the perfect life" is pretty spot on.

In fact, if you look at mainstream entertainment and the type of sexual/romantic relationships that are packaged and sold to us, those are pretty much the two types of fantasies we usually see, and it's usually divided among gender lines, right? - the pornographic fantasy that is generally sold to men, and the rom-com fantasy that is generally sold to women. It's probably no accident that in this book, it's Matt, a man, that represents the strip club, and it's Elizabeth, a woman, who desires the white picket fence and 2.5 kids. That's how societal gender roles would have things go.

That said, these two particular characters aren't strictly one-dimensional either, and the fact that their backgrounds are so different and yet so parallel (in that they both feel trapped in their lives thanks to their parents) makes for a good pairing. I find that I'm generally a fan of the "opposites attract" type of romance.

This was a quick, fun read, and actually provided some good food for thought.
3 stars adult Claire Kent Netgalley romance/erotica