No Interest in Love by Cassie Mae 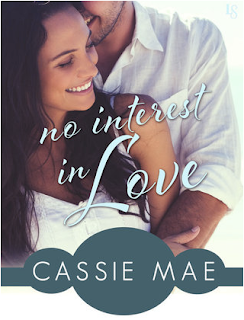 Summary: Jace is an up-and-coming actor whose role in a SyFy channel movie has gotten him noticed by a famous starlet who wants him for her next movie - and her bed. And he is psyched because it means that this could be his big break, as well as his chance to get some good no-strings-attached sex from a beautiful woman. Because that's pretty much his goal in life.

Jace and his agent, Shaylene, need to get from Los Angeles to Alabama for the screen test in just a few days, but as they begin their journey, anything and everything that can go wrong does - including the fact that Jace can no longer ignore the attraction he begins to feel towards Shay, whom he finds stern, disapproving, sarcastic... and utterly adorable.

Thoughts: Jace is absolutely the least interesting part of this book. He's immature and rather shallow, and maybe he's supposed to be that way, but it can kind of be a problem since he's narrating the entire story. He pretty much narrates his life as if it were a movie, and he starts off by describing how much he wants to be like Barney Stinson from How I Met Your Mother, a show that I don't really like. So... we were not off to a great start, Jace. I was already eye-rolling five pages in. How can he be the "romantic hero" of the story when I personally see nothing heroic about him?

But what I did like (a lot!) about this book is that it's funny. It's a series of totally ridiculous mini-disasters, and having such a starkly-opposite personality type in Shaylene helps to balance out Jace's personality, because she is not afraid to tell him when he's being an idiot. I really liked their dynamic, and their banter was hilarious. I should note that the big movie part that Jace is hoping to land is a rom-com, and therefore, the novel itself reads very much like a rom-com. It was very easy for me to picture everything in a cinematic sense.

I should also note that Shaylene is Korean-American. As in, full Asian born in America. Honestly, there aren't too many characters like her that I've come across so far (main characters, not quirky best friends or sidekicks), in any genre, and I was really pleased. And she's never fetishized or stereotyped (at least, not in obvious ways - I thought she was at times a borderline Wes-Anderson-type Asian heroine), and she's a fully-realized person instead of just being a plot catalyst. I actually wanted to know more about her, and wished that the novel included equal amounts of her narration.

This was a fun book. Other reviewers I've seen either LOVE it or hate it, and I think I fall more on the loving-it side, though I definitely have my criticisms of it too. But I would definitely give it a chance if you're looking for a cute, amusing, quick read.

But one more thing:

Since the heroine of the story is clearly Korean, why the hell did you put a girl who is clearly not Asian on the cover?

Sincerely,
An Asian reader who is sick to death of the white-washing and erasure of her race from major forms of media
3 stars adult Cassie Mae Netgalley romance/erotica