Their Fractured Light by Amie Kaufman and Meagan Spooner 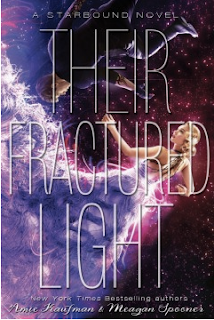 Summary: This is book 3 of the Starbound trilogy. Unfortunately, I read the first two before I started book-blogging, so I don't have any previous reviews to link you to, but suffice it to say that I gave each of the two previous installments five stars as well, so full disclosure: I LOVE this series.

Starbound features three books, each one about a different couple, but they are all sequential and take place in the same universe. Their stories are connected, and if you go back and look, you'll see that the later characters were mentioned in earlier books, and earlier characters make appearances in later books.

These Broken Stars kicks off the series, with Tarver Merendsen and Lilac LaRoux. He is a jaded soldier on a victory tour onboard the luxury spaceliner Icarus, and she is the daughter of the most powerful man in the universe, Roderick LaRoux of LaRoux Industries; the Icarus is Daddy's ship. Suddenly, the Icarus crashes down on a strange planet, and they find themselves having to survive not just the elements, but the strange whispering voices and apparitions that begin to appear. This book really made me cry, by the way.

This Shattered World, book 2, is the story of Jubilee Chase and Flynn Cormac. Lee is a ruthless military captain, all too happy to help crush the rebel forces who have been causing trouble on the planet Avon, considering how rebels were responsible for the death of her parents. Flynn is on a mission to reclaim the only home he's ever known from certain corporations hoping to take over. But when their paths cross and he takes her prisoner, he realizes that he can't allow her to be executed, and they both find themselves in the middle of a war where the soldiers are being hijacked by a much greater, more sinister force. (Spoiler alert: It's LaRoux Industries!) By the way, I was SO EXCITED by the fact that Lee is half-black, half-Chinese. Like, that is just the greatest thing. #weneedmorediversebooks

Finally, Their Fractured Light is the story of Sofia Quinn, a young grifter seeking revenge for her father's death at the hands of LaRoux, and Gideon Marchant, also known as the infamous hacker, The Knave of Hearts. They cross paths on a botched mission, and they suddenly find themselves unlikely allies on the run from LaRoux Industries' security force. They know that LaRoux is up to something absolutely terrible, and as they get closer to the truth, they find themselves in more dangerous situations, forced to trust each other when previously they've only ever worked alone. Things come to a head, and all six of them finally come together in one last ditch effort to stop LaRoux and SAVE THE UNIVERSE. (Okay, I made that sound very hyperbolic, but it kind of is what they need to do.)

Thoughts: So, as I said earlier, I LOVE LOVE LOVE this series, so I was very excited for this third book to come out, and holy crap, it did NOT disappoint.

I loved that each book had a different feel. While the books are much, much more than how I'm about to describe them, the first one was basically a shipwreck survival love story; the second one was a little R&J-esque, with two lovers on opposite sides of a war; and this third one is a quite the battle of wits, with two people needing to outsmart each other but also feeling drawn to one another. In fact, it reminded me a little bit of the tv show Leverage, which I really loved - it was about a band of thieves (which included a hacker and a grifter!) trying to take down evil corporate baddies on behalf of regular people who have been disempowered or disenfranchised. I saw a bit of that dynamic in Sofia and Gideon, and it made me super happy :)

The last third (?) or so of the book had all six main characters thrown together, having to work together, and it was pretty great. In fact, this particular book felt more action packed, with the characters constantly on the run or in hiding, so it was tense all the way through. I could NOT stop reading it, and I think I'm going to have to revisit the first two books, because I read them as they were released, and I'd like to go back and look for the connections.

One thing I appreciate, and this is mildly spoilery, is that in the end, Roderick LaRoux isn't the BIG BADDIE. I mean, he's definitely bad, don't get me wrong, but the way the story ends adds some complex layers to his character, and I'm glad that they took the time to do that. It would've been easy to have him be a cartoonish, mustache-twirling villain with zero depth, but in the end, he does seem a lot more real.

So yes. Read this book. Read this entire series. I think the characters are strong and complex, the action is heart-pounding, and the love stories are swoonworthy. Definitely a favorite.
5 stars Amie Kaufman Meagan Spooner scifi YAF