I Wish You Were Mine by Lauren Layne 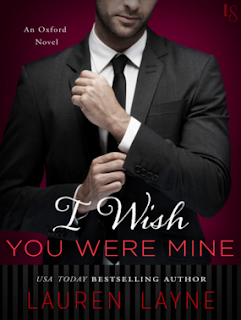 Summary: Jackson Burke once had it all - he was an NFL first-round draft pick, he was married to the amazingly gorgeous Madison, and he was beloved by the entire country.

But his gorgeous wife turned out to be not so gorgeous on the inside, and their marriage fell apart, and finally, a car accident ended his career. And now he's the fitness editor for Oxford magazine, cursing his life and wishing for SOME way to get back into football.

As he thinks about the old days, the only good thing he remembers about it, besides football, is Mollie, Madison's younger sister. As Madison became consumed by the spotlight and perks of being a Housewife of a football player, it was Mollie who really listened to him, who treated him like a person, rather than a paycheck.

And now Madison is no longer his wife, and Mollie is no longer the "kid sister," but a grown-up, beautiful woman in her own right. And as she moves in with him temporarily, sparks fly between them, But can Mollie bring herself to betray her sister by hooking up with her ex-brother-in-law? And what IS Madison up to, popping up to New York all the time, even though she was the one who filed for divorce?

Thoughts: I really liked the first book of Lauren Layne's Oxford series, so I jumped at the chance to read this one. I never got around to reading the books about the Stiletto women, but they're still on my radar.

I think Jackson Burke was mentioned a couple of times in the first book - I don't think he was a staff member yet. Basically, the story is that his wife accused him of cheating on her, naming several women, and multiple women came forward to confirm that they had, in fact, had affairs with him. Spoiler alert: it's all untrue. As it turns out, Madison is an almost cartoonishly terrible b*tch, and she did all this to get around their prenup agreement, and Jackson never cleared up the truth because (to his detriment) he hates talking to the press. Seriously, I've read a lot of awful characters, but Madison is almost worse than Voldemort. He was at least straightforwardly evil. She's the sort of person who will smile sweetly at you, and then put arsenic in your cosmopolitan.

Anyway... the book wasn't a fun read, exactly, but I'm not saying this in a bad way. It's just, it made me hate Madison (and people like her) so much, and feel so bad for both Mollie and Jackson that it kind of overshadowed the fun parts. I just spent the whole time, like, "OMG TAKE HER DOWN!!!" And I definitely felt miserable for Jackson, because I understand the feeling-like-an-outsider-at-work thing and missing out on something you love due to injury, so I was full of feels while reading this.

But I definitely enjoyed re-meeting the other characters from the first book and reading their banter. (PS - I'm really glad the next book will be about Lincoln.) I can't wait to read the next book, and to read more of Lauren Layne's previous books.
3 stars adult Lauren Layne Netgalley romance/erotica