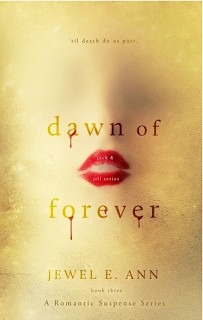 This is a review of the third book of a series, and therefore, it will contain spoilers for the first two books as well. Please see my reviews for End of Day and Middle of Knight here.

I think at this point, you must know that I've definitely been won over into the cult of Jewel E. Ann. I've read ALL her available books now, and while I definitely have my favorites among them, I generally think she's a great writer with a knack for storytelling and writing interesting, complex characters. So right off the bat, you should know that I thought this was an amazing end to a really good trilogy. I stayed up until 2am reading this book, having started the minute it appeared on my Kindle.


Spoilers for ALL THE BOOKS below!

When we last left off at the end of book 2, Jillian had come over to AJ's expecting a Thanksgiving dinner. What she saw at first was a set-up for a romantic evening with AJ (cloth napkins and everything!), and what she eventually found was a suicide note.

AJ's cancer had been slowly taking away all the pieces of himself, and before things could get any worse, he had asked Jackson to help end his life. Jillian of course finds this unforgivable, and as she prepares to fly to Portland to attend AJ's funeral, she leaves her phone behind and essentially expresses that things will never be the same for the two of them ever again.

But she never makes it to the funeral - before she gets there, she is kidnapped and taken away by the person who has been stalking her and apparently her family for years.

It's weird for me to say this, but as awful and terrible as Jillian's time in captivity is, it's actually not the most compelling part of this book. This kidnapper is a specialist in manipulation and psychological (and physical) torture, and is so completely unhinged, but this part of the plot actually felt like a fly buzzing in my ear - and that's not because it was bad or boring or anything like that. It's because all the other storylines, new and old, that are related were SO compelling, SO heartbreaking, that they really pulled me in. So, let me repeat - this kidnapping part of the story, which is not in any way bad or badly written, felt like filler just because all other parts were just amazing.

So what were these parts that were so awesome? Let's start with one that began in book 2 - Luke and Jessica/Jillian run into each other totally coincidentally, and since Luke now knows the truth of why Jessica "died," he of course is going to stop at nothing until he finds her and either gets her back or finds some closure. Having watched the Luke/Jessica romance unfold in flashback over the course of the series, I pretty much have to count them as one of my OTPs. In this third book, not only do we get some more of their amazing past (like his romantic-AF Post-It Note proposal), but we also get Luke's quest to find her, especially as he realizes (even before Jackson does) that something is wrong and that Jessica/Jillian isn't just away figuring things out. A love story for the ages, seriously. Again, the kidnapping, while important and crucial, totally takes a backseat to OTP of the series.

This quest, by the way, had the side effect of introducing two side characters to each other and teasing their attraction, but never really going anywhere with it. And that's not a flaw - that's a tease, or, at least it felt like one. Ms. Ann, I do hope you pick that up later at some point. I SHIP IT, okay? I think we all do!

Also compelling: Jackson and Ryn. Or, actually, Jackson and Ryn separately. Ryn has become one of my favorite characters, because she's so complexly-written. Her ex was a nightmare of an abusive husband - still is, really, because even though they're divorced now, he still manages to find ways to manipulate her and tear her down, starting of course with their daughter, who doesn't know that her father abused her mother, and therefore thinks Ryn is some loser of a woman with no self-respect. Ryn is a survivor, but it's not a linear story of triumph - her journey to reclaiming herself is difficult and filled with setbacks and triggers, and it's very real. Her story eventually ends happily, but not without some real turmoil in between, and the scene where she reveals the truth to her daughter was simultaneously filled with empowerment as well as frustration.

And Jackson's own story, of why he-as-Jude had zero interest in relationships and essentially had a revolving door of hookups, was tied into a major reveal that occurs at the beginning of this book - he had learned that their mother had had an affair, and he realized that if the woman he held in highest regard, of whom he thought the world, could not be trusted, then no woman was deserving of his trust (or his love), except for his sister.

And then, of course the story of Sunny Day's love affair becomes a major part of this story, and I'm not going to reveal much more about it here, but in true Jewel E. Ann fashion, it is complicated, it is complex, and it will make you feel feelings that you didn't necessarily want to feel because it is so complex. I had trouble reading it myself, because of what we know about one of the other characters who is involved in this storyline. It forced me to imagine this character (who was previously shown to be despicable) in complex ways, and I really didn't want to do that.

But it really goes to show that monsters don't come from nowhere. In fact, no one comes from nowhere. We're a product of many different influences and experiences and, aside from possibly Ryn's horrible ex-husband, there is no one in this book who is just simply a monster. These characters are more than just black and white, night and day (see what I did there?), which really is one of the standout features of this particular series, but in any of Jewel E. Ann's books - some of these characters are absolutely effed-up people, but they each have a story, and those stories are absolutely worth reading.
5 stars adult Jewel E Ann romance/erotica