End of Day and Middle of Knight by Jewel E. Ann 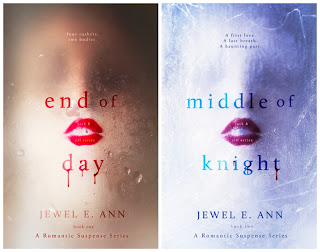 After reading (and LOVING) Undeniably You, I decided to check out Jewel E. Ann's other books, and found that pretty much all of them have 4+ star ratings on Goodreads, which is pretty amazing. I snagged a few that were available on Kindle Unlimited.

In addition to these two books, I also read Idle Bloom (standalone) and the Holding You series (duology, really), and I really liked all of them, but this Jack and Jill series REALLY reeled me in, so I felt compelled to write a review for it. (You can see my quick thoughts for the others here and here, respectively.)

Summary: Jessica and Jude Day are no more - for whatever reason, the twin siblings have had to fake their deaths and then start over with new lives and new names, Jillian and Jackson Knight, in a sleepy retirement community in Omaha, Nebraska. Jillian rides loud motorcycles, gets the mail in an alarming state of undress, and sells "personal pleasure devices" at parties. Jackson teaches the piano and tries to shed his previous habits as a playboy. No matter what, they've got each other, whether they need a shoulder to cry on or a partner to spar with. Oh yeah - they've been trained pretty much since childhood as agents for some sort of secret organization, so there's that too.

But the past is never far behind, for Jillian particularly. Her newfound, intense relationship with her neighbor AJ triggers memories of her (Jessica's) relationship with Luke, a psychiatrist she started seeing initially to help her through some deep and serious issues stemming from a traumatic incident from her youth. But this new relationship comes with its own set of unique issues, and as Jillian tries to help AJ through his own messy life, she is finding it harder to keep Jessica buried where she belongs.

Jillian's free spirit (read: recklessness and unpredictability) are a constant source of worry for her brother Jackson. We don't find out as much about Jackson's internal workings (or even Jude's) until the second book, when he starts to fall for an older woman named Ryn. But Ryn has her own dangerous past as well, and when the twins realize that there is someone out there who is stalking and taunting them, Jackson realizes that he has more to lose than just his sister.

Thoughts: This is a series about people who have been broken by the circumstances of their lives and how they try the best they can to pull through. Jillian, Jessica (separately), Jackson, Luke, AJ, and Ryn are all tremendously complex, flawed, and multi-faceted characters, and I've been engrossed for the last couple of days as I've blitzed through these books.

It's suspenseful and violent and sexy - there were no holds barred. The ugly, gritty stuff is ugly and gritty, and the sweet, romantic stuff is sweet and romantic, and it's quite a roller coaster of emotions. I would apply a trigger warning for this series for sure, for discussion of domestic abuse and rape. This isn't a sappy, lovey-dovey romance novel, but at the same time, there are many moments that are so powerfully sweet that they brought tears to my eyes.

I am absolutely enthralled. There is one more book in this series, and it doesn't come out for another WEEK, so as you can imagine, I'm feeling absolutely impatient. I'm actually a little mad at myself for not timing my reading of these first two books a little better so that I could just jump into the third book.

If you can stomach the difficult stuff, then I would highly recommend reading this series.
5 stars adult Jewel E Ann romance/erotica