Just Give Me a Reason by Rebecca Rogers Maher 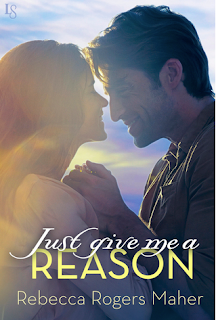 Summary: Tony's got a lot on his plate - he's a newly-divorced father of two girls and his business is failing, and he definitely doesn't have room in his life for beautiful Beth, who is relationship-phobic and also happens to have a baby on the way (as the result of a one-night stand).

However, neither of them can deny the intense chemistry that exists between them every time they're together, and when circumstances throw them alone together for a few days and sparks ignite, they have to decide if what they have is worth pursuing.


Thoughts: This was a fun, light read - no dark secrets, no emotionally-fraught drama, no lives in danger. Just a classic case of "Do we or don't we?", made more interesting by Beth's pregnancy, which is an important part of the story's progression.

The two main things that I appreciated: Beth is in the second half of her pregnancy when the story really picks up, and I'm glad that she is still portrayed as a strong, desirable, capable woman. In fact, as one of the other characters tells her later on (I'm paraphrasing), "You're right, you don't need a man. But it's okay to want one." Beth is vibrant and straightforward; she is self-admittedly not the motherly type; she is allowed to be a full-on human being. Pregnant women are so often portrayed as whiny or naggy or irrational, and definitely are not often portrayed as sexy and deserving of sex. PS - I can relate to a lot of the things she says about pregnancy and post-birth recovery.

The other thing I appreciated is that most of the characters are Latino, which is pretty awesome. (It also meant that I didn't understand some of the Spanish, but that's okay.) And again, they are allowed to be full-on human beings - their backgrounds are a part of who they are, but they aren't everything that they are, and I like that.

I'm going to go ahead and add a third thing I appreciated - I like Tony as well. He's a father of two young girls, he accepts his share of the responsibility for his marriage crumbling, he doesn't slut-shame his ex-wife, and he doesn't bat an eyelash at offering his love to a woman who is having another man's child (as well as offering that love to the child as well). He's an all-around good man. He's not a romance novel hero who is actually a creepy and/or abusive jerk but is romanticized to the point that he appears to be a good man - he just IS a good man. And that's awesome.

So, clearly, there were a lot of things I liked about this book, but what kept me from liking it more was just that it was a simple, straightforward story, so while I enjoyed it, it didn't overwhelm me with feels either. It was a cute, sweet story with some really great characterization, and I would definitely recommend it.
3 stars adult Netgalley Rebecca Rogers Maher romance/erotica