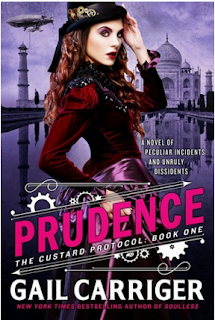 This is the first book of Carriger's new series, The Custard Protocol, and it takes place in the same universe as her other series, but much later in time. Essentially, it has spoilers for the events of The Parasol Protectorate series, so if you've never read any of those books, you might feel really lost while reading this one, unless you're really good at forming inferences and filling in the blanks.

Summary: Lady Prudence Alessandra Maccon Akeldama is a metanatural. Her biological mother (Lady Alexia Tarabotti) is a preternatural (soulless) while her biological father (Lord Conall Maccon) is a supernatural (werewolf). By the way, her adoptive father (Lord Akeldama) is a vampire. Therefore, it can be said that Rue leads quite a singular existence, between her feisty, irreverent personality and her ability to temporarily steal supernatural abilities through touch.

Rue is given her own airship, The Spotted Custard, and along with her friends, she is sent on a mission to India to inquire about tea. However, when she gets there, she finds that the situation is a lot more complicated than her parents (all of them!) had initially let on. With mysterious coded messages, a strange lioness, and supernaturals she's never encountered before, Rue finds herself in the middle of a possible war, over more than just tea.


Thoughts: Rue, who was just a toddler at the end of The Parasol Protectorate, is all grown up with her very own series. In truth, I didn't LOVE this book, especially considering how much I love Parasol Protectorate and the Finishing School series, but I liked it enough to want to keep reading, and I hope it gets better.

The beginning took me a while to get through, and honestly, I started this book over twice before I could finally stick to it. I was eager for any mentions of our favorite PP characters, and that's what got me through until we got to the journey itself.

What I liked: Carriger's usual quirky humor is there, and there were a lot of choice lines that made me laugh. I even don't usually like jokes about flatulence, but I thought they were funny in this book (at least, initially). Rue has wit and spunk to rival her famous mother, and I loved that. Also, I don't know if it's just because the last Carriger book I read before this was the last Finishing School book, but there were SO many instances where I thought I was reading about girls being spies, so that was fun too - it felt a little like a marriage of the first two series.

I also loved the dynamics of the supporting characters - Primrose and Percy are Ivy Tunstell's kids, also all grown up, and Quesnel Lefoux is Madame Lefoux's son, about ten? twelve? years older than the other three. I like the four of them as a team, and I especially like Rue and Prim as BFFs. Also, given how I'm a fan of romance, I LOVE the flirt-hate relationship between Rue and Quesnel, and if I'm being honest, a big part of what I'm looking forward to in future books will be seeing that develop. (How did he make "I accept" sound like the sexiest thing ever? *fans self*)

What I didn't like so much: I think a lot of other reviewers have written at length about the way India is characterized/portrayed/etc, so I'm not going to dive into that. I will just say that I couldn't tell if it was supposed to be straightforward or if it was, like, mimicking the way people thought of India at the time, or... I don't know. It didn't quite sit right with me that the only Indian people who even got to speak in the novel were either servants (with two-lines) or animalistic supernaturals, and the exotification made me uncomfortable, because (again) I couldn't tell if it was supposed to be read straight or if it was supposed to be a critique. So I'm withholding my judgment on this matter until I see how the rest of the series bears it out, but I will say that it prickled at me.

In addition, I felt like the pacing wasn't quite working for me. But I also think that, since it's the first novel of a series, you kind of have to get a lot of exposition out of the way, and therefore, I'm not going to judge it too harshly on that basis either, kind of like the first couple of episodes of a tv show. Because I adore Gail Carriger as a person and especially as a writer, I'm just going to shrug this one off, because it took me a couple tries to get into Soulless the first time I tried to read it too, and then I ended up LOVING it.

I don't love Prudence, but I love the idea of it and what it could be, so I am eagerly awaiting book 2 (which comes out in July). For those who want to linger a bit longer in this universe, I would definitely recommend this book, but with the proviso that this is, of course, a different series, so do keep in mind that this is Rue's story and not Alexia's.
3 stars adult Gail Carriger steampunk supernatural