Review: Pride and Prejudice and Zombies 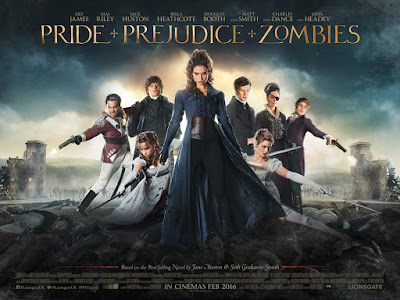 In short: You must allow me to tell you how ardently I admire and love this movie.

Note: I haven't actually read the PPZ book (always meant to, never got around to it), so I can't draw comparisons between this and its book, but I've read the original P&P, obviously, and seen multiple adaptations, so that's where I'm coming from with this.


It is a truth universally acknowledged by all P&P fans that George Wickham is basically evil incarnate. Well, this version of P&P has decided to make this the LITERAL truth.

In Pride and Prejudice and Zombies, the history of Regency England gets rewritten as London has been besieged by a horrible zombie outbreak (they blame the French), and walls and moats have been built to contain the scourge to protect the rest of England. Citizens have armed themselves with weapons and martial arts skills - "The rich trained in Japan; in China, the wise."

Fitzwilliam Darcy (here, a colonel) is a celebrated zombie soldier who comes to the English countryside with his best friend, Mr. Bingley, who has decided to move into Netherfield (after its previous inhabitants and their guests were all killed in a zombie attack).

It is there that they meet the Bennet sisters, particularly Jane and Lizzy, the eldest two. Jane is the most beautiful girl in the room, while Lizzy is a smart, fierce fighter. In fact, all five Bennet sisters are trained in the deadly arts, and it is at that first ball where they catch the attention of Bingley and Darcy, as the assembly room is besieged by zombies and the sisters fall into attack formation in order to defeat them.

Unfortunately for Darcy, who finds himself quickly besotted with the brave, strong second sister, Lizzy pretty much hates his guts after hearing him tell Bingley initially that she's "tolerable, but handsome enough to tempt me."

Well, we all know the story. Even if you've never read the book, it's a story that's been done many times over, in many different modes. But seriously, you've never seen it quite like this.

I loved it. I LOVED IT. Even with some major changes and zombies galore, it's still recognizably P&P. It's enough P&P for hardcore fans to love it, but it's enough fun stuff to make it a new, refreshing experience.

If you're a Jane Austen fan with a sense of humor, you will love it too. There are plenty of inside jokes for us Austenites, from throwing in some references to other Austen novels (I caught a couple lines nicked from Northanger Abbey and Persuasion), to Darcy jumping dramatically into a lake (YASSSSS), to a literally-bodice-ripping showdown between Lizzy and Darcy. (OH YES - how many times have we seen/read his first proposal and noticed that Lizzy would probably love nothing more than to kick his ass for all the stuff he says about her family? Well, wish fulfillment ahoy! She actually does!)

And all your favorites are there (except Georgiana Darcy, who appears in flashback only). They even included Mrs. Hurst! And: I swear, Lena Headey must have some sort of stipulation in every contract she signs that she MUST play a badass lady, because her Lady Catherine de Bourgh is not only one of the wealthiest women of England, but she's also one of the best swordswomen too. Seriously, she wears a frickin' eye patch because she lost an eye fighting zombies.

Even the locations are there, but modified - Longbourn has a moat and the girls use its cellar for combat training; Rosings is elevated with staircase that lowers; and Netherfield has secret underground tunnels and watchmen. (Unfortunately, there was no Pemberley trip in this one *sadface*) This is a different world than what we're used to, but it's still all recognizably there.

One thing that surprised me (a lot!) was that Mr. Collins, played by Matt Smith, totally stole the show. I never thought I'd EVER say this, but Mr. Collins was pretty much the greatest part of the entire movie (and that is no small feat, considering how awesome the movie is). I pretty much laughed at every scene he was in. He was AWESOME.

The overarching zombie plot is an interesting one - in this universe, those who are bitten don't immediately turn into mindless zombies, but rather, it is the ingestion of human brains that accelerates the zombiefication (? how do you even spell that?) process. George Wickham has discovered a church that helps keep bitten humans human by feeding them pig brains (along with the word of God), and his plan is to make some sort of treaty with the sentient zombies, to keep the human race from getting wiped out. He believes that with the right sort of leader, they can actually make peace with the zombies. I'll try not to spoil the rest for you, but let's just say that G Dubs is still very much the villain in this version.

I have to say, they were kind of AWESOME. They were (ARE) a perfect match. I loved the way they were written - Darcy, the snobby, serious, slightly-emo-looking zombie expert, and Lizzy, the badass warrior girl whose wit and fighting skills find a way into his heart - and I loved the actors' chemistry. Considering the tone and setting of this adaptation, they were pitch perfect. Also, three cheers to the wardrobe department - Lizzy has this amazing dark red coat with a leather collar that I was drooling over, and Darcy has a signature leather coat that he wears in every scene. (PS - I love that the women's dresses were of a range of tones. Like, Lizzie wears some dark, rich colors in this one!)

A lot of things had to be abridged for the sake of time and because of the confines of the adaptation, but all in all, there was so much to love about Pride and Prejudice and Zombies! (I certainly loved it more than the 2005 Keira Knightley one.) Despite the obvious changes (zombie apocalypse!) it actually held up really well as an Austen adaptation. It was one heck of a good time, and I definitely want to see it again, many times.
book to movie adaptations Jane Austen