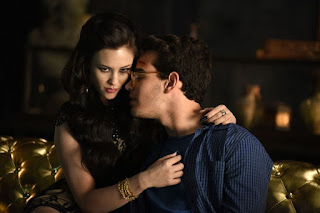 I had meant to do these weekly, after each episode, but life gets in the way sometimes. So here are two of them together.

Spoilers for the books and the episodes ahead.

When we last left off, Simon had just been kidnapped by the vampires, who offer to trade him for the Mortal Cup. Episode 3 is basically about what happens to Simon while he's being held at the vampires' lair, Hotel DuMort, and the shadowhunter crew's attempt to retrieve him.

Notable differences include the introduction of Camille Belcourt, whom I don't think we met in the book series until later (definitely not in the first book). In the book, Raphael is the one who feeds off Simon, and in this universe's vampire mythology, being bitten by a vampire makes the victim want to return to that vampire - kind of like a siren call, I guess? In this case, it's Camille who has Simon under her thrall, and there are heavy hints as to what's in store for Simon, as he drinks up a little of her blood during a heavy makeout session.

In the meantime, Clary, Jace, and company are trying to find a way to get Simon back, and this causes some tension between Jace and Alec, whom we learn are parabatai - they're warrior partners, but the bond goes much deeper than that. If one of them were to die, Jace explains, the other would die a little inside as well. In the book, there's a whole magical process involved in choosing your parabatai, so it's no small matter. But anyway, Alec does not seem to like or trust Clary, and he's not happy that Jace keeps choosing this girl over him.

The Simon retrieval mission is eventually successful, with Raphael mysteriously just deciding to let Simon leave with them. (I don't know if he had a specific motive that hasn't been revealed yet, or if I missed a few details.) But it remains to be seen whether Jace and Alec's friendship will continue to survive. 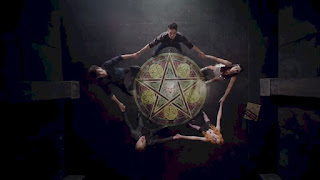 In the next episode, things seem to splinter a little further. Clary learns that Magnus Bane is the warlock who holds the key to her memories, but when they manage to get a meeting with him, he reveals that he fed all her memories to a memory demon, and they would have to summon him in order to retrieve them.

Things get a little awkward when the demon requires a sacrificial contribution - one memory of the person that they love the most. Clary's is of her mother; Izzy's is of her brother Alec; Alec's is of... Jace. And everyone else can see this, by the way. (So, if you haven't read the series and if you haven't put two and two together yet, Alec is in love with Jace.) Alec freaks out and breaks the circle, leaving the demon dangerous and difficult to contain, and the only way to stop it at this point is to destroy it, so... there goes Clary's chance at retrieving her memories.

In the meantime, Simon, who has left the institute and returned home, is feeling the further effects of his visit with the vampires.

Overall, I felt like these were better than the first two episodes, and I'm definitely invested now. I'm trying not to make TOO many comparisons to the book, especially since tv is a far different medium to adapt for than film - I'm assuming that they have to stretch out the timeline a bit. (For example, in the book, the party at which they meet Magnus is the same party where Simon actually gets turned into a rat and kidnapped, but in this case, it's written as two separate incidents.)

I'm actually not sure how I feel about Izzy so far. I feel like she's far more sexual than I originally imagined - I mean, she's supposed to be incredibly powerful and strong sexually (like, in terms of her sex appeal), but there's just something so male-gaze-y about this particular portrayal of Izzy where I feel like Book Izzy would be above that. But then again, I could be totally wrong and remembering Izzy completely incorrectly. I don't have a problem with Izzy being a sexual character; I just don't always feel that, as written/portrayed, it comes from a place of self-empowerment, so much as a place of wanting to get ratings and to draw in male viewers...? Again, I could be wrong, and feel free to disagree with me. I don't even know how to explain my feelings very well.