The Jock and the Fat Chick by Nicole Winters 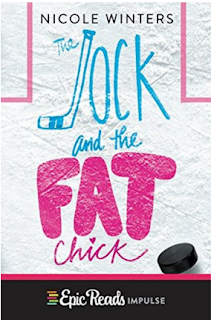 Thoughts at a glance: ** It was okay

Summary: Kevin is the hot, popular star of his high school hockey team, and nothing is getting in the way of his earning a hockey scholarship for college.

Well, nothing except a failed food log assignment for gym class. As it turns out, protein shakes and meal-replacement bars are not a good example of healthy eating.

To make up for his failed assignment, his coach/gym teacher makes him take the food/cooking unit in domestic tech class, where he meets Claire. Claire is not only an amazing cook who will help him make up his grade, but she is also funny, friendly, and gorgeous, with a body like a perfect figure 8.

Personally, Kevin loves her curves, but if word got out to his friends and teammates that he was into a "fat chick" (as opposed to the thinner, athletic cheerleaders they're "supposed to" date), he would be considered a laughingstock.

But as he spends more time with Claire and gets to know her better, he realizes he's falling for her, and he realizes that hiding his feelings - and his growing disgust for his friends' immature and mean-spirited comments - is much harder than he had planned.

Thoughts: To start with, I'm a little disappointed that the "fat chick" of the title was probably not actually fat. Having curves and an hourglass figure does not necessarily equate to fat. (For example, Christina Hendricks is not someone I would call a "fat chick.")

But that's my perspective as a feminist, pro-HAES adult woman living in a diverse, well-populated, generally progressive/liberal area of the United States, I guess. (PS - I am also both a jock and a fat chick.) I suppose not everyone has the privilege of having that perspective, especially at such a  young age.

The kids in this book (at least, the popular ones) are SO awful. I know we're supposed to find them awful, but they are SO, SO awful. So awful that I found myself cringing and wanting to skip through any scene that they were in. At least Kevin (who is the narrator of the entire story) has enough self-awareness to recognize when his friends are awful and when his bystander behavior is awful, even if it takes him the entire book to finally grow a pair and stand up to the awfulness. To be honest, he's kind of a bonehead, but since we're in his head for the entire book, it's a little easier to be sympathetic, even if sometimes you want to just grab him by the shoulders and shake him.

Kevin is rather irritatingly passive for much of the book, so really, I was most interested in Claire, who is allowed some complexity, and not just because of her body. She's good at cooking because her parents are both master chefs, and she plans to study in Europe after graduation - either cooking in France like her father, or pastries in Italy like her mother. Even her interest in Kevin is complex, when she later reveals why she was initially interested in him in the first place - this is not a case of an insecure fat girl being swept off her feet by the school jock. Claire is large and in charge, of herself, her body, etc., and that's pretty awesome. (Even if she's not actually fat.) Instead, it's Kevin, the jock, who is riddled with insecurities.

Aside from that, I really enjoyed reading about the actual art of cooking. I love imagery, and I love food, so anytime I get to read rich descriptions of cooking and eating, I get hooked.

I had high hopes for this story and the lessons it could impart, but I found myself feeling dissatisfied for much of it. So it was just okay to me.
2 stars Nicole Winters YAF