Dreaming of Antigone by Robin Bridges 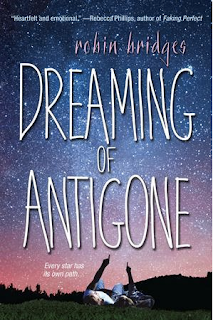 Andria has a few good things to hang onto, though: she has been seizure-free for almost six months (the last one having occurred the day Iris died), so she may finally be allowed to get her driver's license; she has a love of astronomy, and when her nightmares of Iris wake her up in the night, she takes comfort in looking at the stars; and she exchanges lines of poetry with a mystery person on her geometry desk every day at school.

But that mystery person ends up being Alex Hammond, the boy her sister dated last, and she's not sure what bothers her more: the fact that he keeps showing up around her or the fact that she's starting to look forward to it, despite the anger that she still carries for his role in Iris' death. And her life is shattered even further when an even darker, more alarming secret about Iris comes to light, one that completely rocks not just her world, but that of everyone around her.

As Andria counts down her last two weeks of needing to be seizure-free, she starts to learn that things might end up being okay after all...


Thoughts: This book is full of stuff that I love - Greek tragic references, poetry, and high emotion. It's a complicated situation that Andria is in, having suffered from epilepsy her whole life and having been treated differently because of it, and the death of her sister (as well as other events in the novel) isolates her further from her peers. On the surface, she seems like a typical goth girl - wears all black, quotes poetry, doesn't fit in with anyone - but as we know (because we're in her head) she has a lot to deal with, emotionally as well as physically.

One thing that surprised me (in a good way) was just how present Iris was in the novel, even though her death had occurred well before the novel opens. If I were to make this book into a movie, I would definitely choose to cast someone to play Iris and to employ lots of flashback scenes. Iris is ever-present to Andria (understandably), and for much of the novel, she is this mythical, larger-than-life figure. She is similar to a manic pixie dream girl at times, but rather than being devoid of a rich internal life, Iris in fact suffered from something very real and serious, and like every character in this novel, I found myself drawn to her as well. She exists in that dreamy, romanticized way that memories often do, but the reality of her pain is tragic.

Alex walks that fine line as well, between being a fiction cliche and being a realized character. Broody, misunderstood, and romantic, it's easy to write him off as girly-fiction fodder, but I could see in certain moments how much pain he is in as well, and it's not a romantic sort of pain either. The burden he carries regarding Iris' death as well as the difficulty of kicking addiction is nothing to scoff at.

I really loved this book. I didn't quite give it five stars because I was so not interested in any of the other teens in this story (like the best friends), but the parts that I loved, I really loved.
4 stars Netgalley Robin Bridges YAF