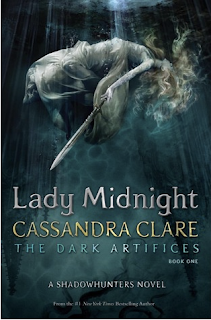 Summary: This is the first book of Clare's Dark Artifices series, but the series itself is a continuation of the Shadowhunter universe, so if you have not read any of the books from her Mortal Instruments or Infernal Devices series, you're going to get rather lost.

This book takes place five years after the events of City of Heavenly Fire (the last Mortal Instruments book), and centers around Emma Carstairs, Julian Blackthorn, and the Los Angeles Shadowhunters Institute.

Emma has spent the past five years trying to find clues as to who killed her parents. The Clave believes that it was Sebastian Morgenstern, but she knows deep down that it wasn't him, and that the killer is still at large. When some new clues arrive that tie in to some recent faerie deaths, Emma finds herself in a bind, because ever since the Dark War with Sebastian Morgenstern, any sort of affiliation with the faeries has been prohibited, since they had helped him. But when a group of faeries themselves arrives at the Institute with an offer they can't refuse, in exchange for the shadowhunters' (secret) help at investigating the murder, both Emma and Julian find themselves caught up in a web of intrigue and dark magic.

Adding to that drama are the growing feelings between the two. Emma and Julian have been best friends from childhood, but they are both realizing that their feelings are starting to go beyond mere friendship. But they are parabatai - shadowhunter fighting partners/soulmates, bound by magic - and it is against shadowhunter LAW to fall in love with your parabatai.


Thoughts: This was a doozy of a story! Once I found out the TRUTH of who and what is behind all the murders, I kinda thought to myself, "That's quite a convoluted plan for what ends up being a rather basic motivation," but it was still a good story nonetheless, and I hadn't guessed any of it ahead of time.

Of course, if you're a hardcore shadowhunter fan, you will want to know if you hear from any of your beloved characters in this story, and I'm happy to say that yes, you do! The main characters from both TMI and TID either appear or are mentioned. I haven't yet read the novellas/short stories collectively known as Tales from Shadowhunter Academy, which take place before this book (but after TMI), so I had to mentally fill in some gaps. (I wish Clare had released to full collection of that before this book came out. I wasn't willing to wait a few months to read both.) So, you'll be happy to hear that (spoiler alert) Clary, Jace, Magnus, Tessa, Jem, etc. are alive and well.

And of course, there are the new characters: Emma and Julian, and in addition, there are all the other Blackthorn siblings, Cristina (a shadowhunter from Mexico who is essentially studying abroad there at the LA institute), etc., etc. I enjoyed reading about all of them, and there are enough Blackthorn kids to continue the shadowhunter universe for AGES. Which is fine, because I grew to love them all throughout the course of the book. The tortured, forbidden love between Emma and Julian is indeed tortured (and forbidden), so there are a lot of FEELS in this book.

If there are two things I love about Cassie Clare's books, they would be FEELS and mythology/backstory. This particular book very heavily references Edgar Allan Poe's poem "Annabel Lee," so if you're a fan of literary allusions, you will love this one, as Clare fits the poem into shadowhunter mythology.

City of Bones was the first Cassie Clare book I've read, and while my reaction to that one was more shocked than anything, I have found over the years I'm liking these stories more and more. I still feel like there were a lot of problematic elements in the TMI series, especially the twist at the beginning (and I won't spoil this for people who haven't read it yet), but after recovering from that initial shock and having seen things through to the end, I like all the books a lot better in hindsight. (Maybe it's also because the movie adaptation was kinda eh, and I find the tv show even more eh.) I like this universe a lot, and I am quite content to stick with it through yet another series.