The Wrath and The Dawn by Renee Ahdieh 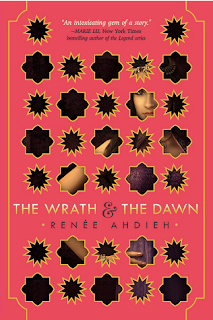 Summary: It's a retelling of the Scheherazade story - every day, Khalid, the Caliph of Khorasan, takes a new bride and every morning she is executed, with no explanations. Shahrzad is determined to avenge the death of her best friend as well as all the other girls, so she volunteers to be Bride #72.

She manages to do the impossible - she escapes execution, by telling Khalid a story so compelling that he postpones her death another day. And so through her wit and personality, she keeps managing to convince Khalid to keep her alive, day after day after day. The entire kingdom is a-buzz - he must truly be in love with her.

Except that while she is trying to assess his weaknesses in order to exact her revenge, she realizes that she is falling in love with him too, and that he is actually not a monster. So then why did so many girls have to die? As she tries to uncover the truth, various other factions are plotting against Khalid too, and Shahrzad finds her loyalties tested.

Thoughts: I've never read the original Scheherazade story, but I'm loosely familiar with it, and I think it's fascinating, so I was sucked into this novel pretty easily. This book is rich with description, romance, intrigue, and interesting characters. And what's also awesome? It's an ENTIRE novel of POC characters, by a POC author. #weneeddiversebooks

Shazi isn't just a feisty girl - she's got SASS. I mean, I read a lot of books with feisty girl protagonists, but she is so damn insolent that she stands out to me among all of them and I LOVE HER. She just might rank up there with Celaena Sardothien for me, that's how much I love her. Actually, there are good comparisons to be drawn between her and Celaena at the start of ToG - they both are in the unenviable position of where their lives depend on a ruler who has taken the lives of people they love; at the same time, they are both conflicted because they are falling in love with the people they'd really like destroy.

Khalid is an interesting character as well - it's clear from the get-go that there's more behind the deaths of the girls than pure evil (literally - it's in the prologue), but of course, we don't find out the full story until Shazi does. I wonder if we would feel the same way if we didn't know ahead of time - would we feel as conflicted as she does, or would we continue to root for their romance? The side characters, too, are interesting and amazing, from Shazi's handmaiden to her silent bodyguard to all those who are considered enemies - I read this entire book in one day because I just. Couldn't. Stop.

And the world itself is gorgeous. I love imagining things cinematically, and the descriptions are so sumptuous, from the clothing to the palace to the elaborate meals that Shazi is served - I know nothing about this part of the world or this time period, but I was able to picture it based on the strength of Ahdieh's descriptions.