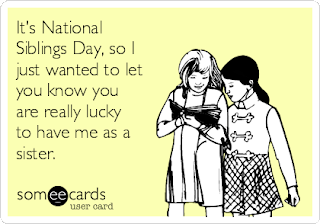 Apparently today is National Siblings Day, and what better way to celebrate (beyond reaching out to my own sibling - Hi Khoa!) than to go over some of my favorite sibling groupings!

Katniss and Prim Everdeen from Suzanne Collins' Hunger Games trilogy
An obvious choice to kick off the list, but I cannot stress enough how important it is that this sibling relationship is given its due. I got tired of the "Gale or Peeta?" arguments really quickly, because if you really, REALLY know Katniss, you know that the person she was most dedicated to throughout the entire series was her sister Prim. And not only did Katniss save Prim from the arena, but Prim was there for Katniss on so many occasions as well. 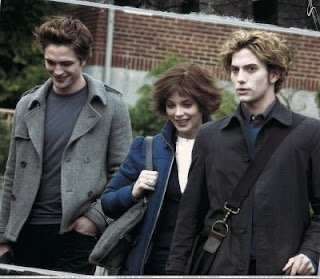 Edward and Alice Cullen from Stephenie Meyers' Twilight series
Okay, I know they're not TRULY siblings (like, blood-related) and that I'm leaving out Rosalie, Emmett, and Jasper, but seriously, Edward and Alice are the best. Especially Alice, who is the closest we can get to a feminist character in the entire series. Really, I wouldn't mind reading entire books about Alice. Due to their special abilities, Edward and Alice are probably the closest siblings of the Cullen family (and remember, that some of them are couples and not siblings) - Edward can read minds, but Alice can anticipate outcomes (and sort of see the future), which makes them so in tune with each other that they make an awesome team. And this doesn't come through so much in the movies, but Alice is an amazing sister to Bella as well. 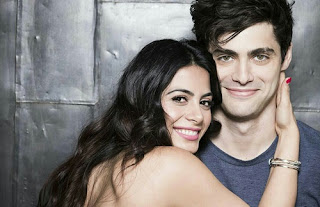 Izzy and Alec Lightwood from Cassandra Clare's The Mortal Instruments series
Speaking of awesome teams, Izzy and Alec are badass Shadowhunter siblings, who have also become adoptive siblings to Jace Wayland. While they each have their own individual dramas, they are always good at kicking ass and they are always there for each other, on and off the battlefield.

Honorable mention: the Blackthorn kids from Clare's Lady Midnight. There has only been one book in the Dark Artifices series so far, but I love, love, love this family and how they take care of each other.

Dimity and Pillover Plumleigh-Teignmott from Gail Carriger's Finishing School series
These two may not be the main characters of the series, but they are still kind of amazing. This series is about a girls' finishing school that actually trains them to be spies and assassins. Dimity is the best friend of protagonist Sophronia, and Pillover is Dimity's little brother. He attends the local boys' school for evil geniuses. They're both endearingly ridiculous together and individually.

Honorable mention: Primrose and Percy Tunstell from Carriger's Prudence. Again, so far there, there has been only one book in the Custard Protocol series, but like Dimity and Pillover, these two are totally awesome together and individually.

Cath and Wren Avery from Rainbow Rowell's Fangirl
It's a classic story of two twins who have grown apart as they start college, but of course it's so much more than that. Cath is still awkward and into writing fanfiction; Wren has radically changed her look and wants to party more. We mainly follow Cath as she tries to navigate this new part of her life and the troubled relationship she has with Wren as a result, but things turn out all right in the end. 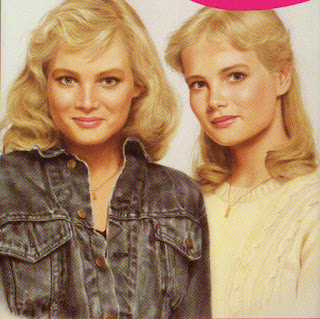 Elizabeth and Jessica Wakefield of Francine Pascal's (many) Sweet Valley series
Speaking of twins who are opposites... I'm probably aging myself here, but holllllla if you were a Sweet Valley fangirl. These two are my OG YA siblings. Their stories could definitely get RIDICULOUS, but they were like a drug for me. I was always a reader growing up, but I completely devoured these books. I couldn't let this list go without adding them on. I was totally an Elizabeth, by the way... in case that wasn't totally obvious. 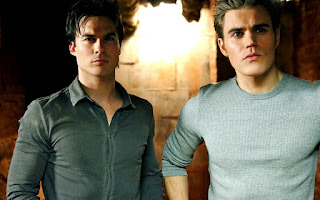 Stefan and Damon Salvatore from LJ Smith's Vampire Diaries series
Okay, while I'm dipping my toes into 1990s, I have to mention these two. And though I have included a photo from the tv show for your pleasure, I have to clarify that I am definitely referring to the original four books that came out in the '90s, and not any of the ones that have come out since the tv show began. (I have nothing against them - I haven't read them.) In the original series, Stefan and Damon were actually from the Italian Renaissance, and yes, they fought over a girl named Katherine, who eventually played them both and turned them into vampires. They eventually find their way - separately - to Fell's Church, VA, where they both meet Elena Gilbert, and of course, there is drama that ensues. Before there was Team Edward/Team Jacob, there was Team Stefan/Team Damon, and whether you loved sensitive, tortured Stefan or broody, dangerous Damon, you still always rooted for them to mend their own relationship. 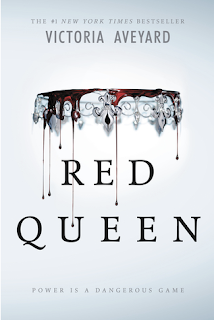 Cal and Maven from Victoria Aveyard's Red Queen series
(Spoilers!) They were the only semi-evil sibling pair that made it onto the list. But how can I help it? The fact that they were so awesome together with Mare is what makes the heartbreak of betrayal so much worse. And he is so deliciously evil too! 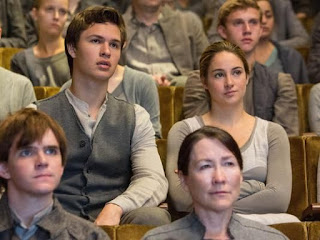 Tris and Caleb Prior from Veronica Roth's Divergent trilogy
(Spoilers!) Speaking of semi-evil... Okay, that's not fair, Caleb isn't actually evil. But he does do something unforgivable. And Tris does not let him off the hook easily, but in the end, she decides to make the ultimate sacrifice for him anyway.

The Weasley kids from JK Rowling's Harry Potter series
I had to save the very best for last, of course. This family is pretty much the best family ever, and if you're not in love with the Weasley kids (excepting possibly Percy), then I don't know what's wrong with you. The Weasley kids rank up there with the Finch family and the March family, as far as sibling-togetherness is concerned. The way they take care of each other (as well as the way they take care of Harry, Hermione, and even Fleur) is something grand and wonderful.

This was by no means a comprehensive list, and I definitely am focusing more on recent YAF books. (Otherwise, I would also throw in the Murry family too.) But hopefully you enjoyed this look at awesome siblings, and either this'll inspire you to give your sibling a hug or, if your sibling is semi-evil too, then maybe this'll give you some ideas to wage war against them =P
Cassandra Clare dystopian fantasy Francine Pascal Gail Carriger JK Rowling listicle LJ Smith Rainbow Rowell steampunk Stephenie Meyer supernatural Suzanne Collins YAF