One Second by Dannika Dark 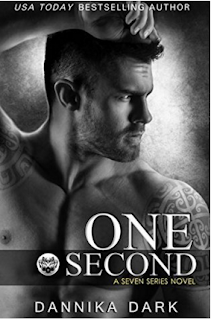 Summary: This is the seventh and last book in Dannika Dark's Seven series. I'm linking to my reviews for the first book as well as the rest of the series, which contain information about the universe of the books as well as the individual characters. My review for this book will contain spoilers for previous books.

I will copy and paste my summary of the universe here, though, for people who don't want to encounter spoilers: The Seven series is about a family of shapeshifters - specifically, they are wolf shapeshifters, so they live in a pack, in Austin, TX. This universe also contains other types of supernatural beings, like vampires (but they are different from other vampires in other books), beings that can transfer emotion, etc. Shapeshifters themselves can be all sorts of animals. All together, these supernatural beings are referred to as Breed. The title of each book figures into the plot (or at least gets mentioned) somehow. Not all members of the Weston pack are Cole brothers, but all the Cole brothers are (amusingly) named after the cities in which they were conceived. Breed can live for hundreds of years, but they age very differently from humans, so while decades separate the Cole brothers, they all look like they are in their mid-20s to mid-30s. The novels are told in shifting perspectives - the female perspectives are presented in first person, while the male perspectives are presented in third person.

In this last installment, the pack war that has been brewing throughout the series finally comes to a head. Rogue wolves have been randomly (or so we think) targeting packs all over the place, and the Weston pack being especially new and on the small side (numbers-wise) are a prime target. We learn that they are working under some unnamed leader, hoping to take territory away from smaller or more vulnerable packs.

In the midst of this pack war, Lexi finds out that she is pregnant, and she is extra stressed about it because all of her previous pregnancies have ended in miscarriages. So on top of worrying about her unborn child not surviving, she is worried about the rest of her pack, as well as herself, not surviving the events to come as well. And when they learn who the mysterious rogue leader is and why the Weston pack is actually beng targeted specifically, things get even more complicated.


Thoughts: I still stand by what I've said previously - this series isn't just a bunch of love scenes with fluff in between; it's an interesting, vivid, fully-realized supernatural world, and I really appreciate that. I was reading this while sitting next to my boyfriend (while keeping an eye on the baseball game on tv), and he knows about my penchant for reading romance, so he kind of smirked at me, "Are you reading something GOOD right now?" And every time he asked me, I was like, "NO, the wolves are fighting right now! There's a wolf war!" and basically, this was what a large part of One Second was. I don't know if it was just me, but I felt like there was less sex in this book (I'm not saying that as a complaint). I can understand it though - One Second is the wrap-up book, and it also focuses specifically on Lexi and Austin (again) rather than a new couple, so there's less of the falling-in-love, OH-THE-PASSION! stuff and more of the taking-care-of-pack-business stuff. That said, all the couples we love - plus one new couple revealed! - are still there, and there are lots of warm and fuzzy feelings. :)

I definitely felt myself holding my breath throughout the fighting parts - as a mom, I was nervous for Lexi on so many levels, but I will spoil things mildly for you and tell you that everyone we care about makes it out alive, including the side characters that we care about.

One Second was a fitting end to a well-done series, and I'm sad that's over, especially when there are other couples I would've liked to hear more about (as well as one younger potential couple that I'm kinda shipping). I would love there to be more.
4 stars Dannika Dark romance/erotica supernatural