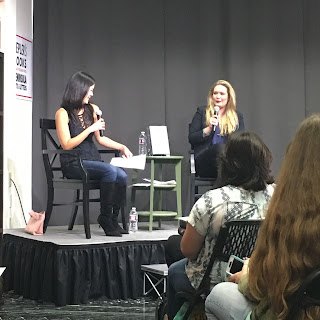 Last week was kind of a fantastic week for bookish fangirling: First, on Tuesday, I got to see/talk to Amie Kaufman and Jay Kristoff for the second time, and also got to meet Stacey Lee, whose book Under the Painted Sky has been on my TBR list for a while.

Second, on Wednesday, I got to meet MY QUEEN. (More on that in a sec.)

And then on Saturday, I WENT TO WIZARDING WORLD OF HARRY POTTER. (I'll post on that soon.)

So yeah, it's been a pretty major week for me, in terms of books! 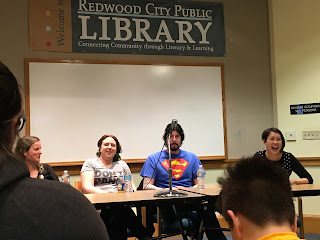 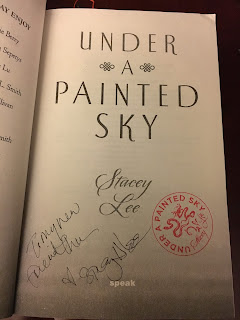 Not a lengthy writeup here, since I have met them before, but I was super excited to get to chat with Amie Kaufman and Jay Kristoff again. They talked a little about Illuminae (have you read it yet? GO READ IT!), a little bit about the next book Gemina (alas, I did not win one of the ARCs they were giving away), and I got to ask them about the new series they are writing together, which is essentially like Hogwarts meets Star Trek. AWESOME.

And as I said above, Stacey Lee was also there (moderating the discussion), and I realized that her book has been on my reading list for a while, so what better time than now to actually buy it and get it signed?


And then, the next night, I MET SARAH J. MAAS. My QUEEN. She of Throne of Glass and A Court of Thorns and Roses.

I read a LOT of YAF, and while I definitely have some favorite standalone books (like TFIOS and Illuminae), I have yet to single out my favorite series. Most of the YA I read are series, big ones like Twilight, The Hunger Games, Divergent, Vampire Academy, and The Mortal Instruments. I love them all, and I have gone through the throes of fandom for each one, but I've never been able to pick out one particular series that I love more than the rest... until Throne of Glass.

TOG is my favorite series, hands down. Everything about it is amazing - sweeping, epic, well-developed characters, rich universe. Celaena is like my literary Buffy Summers, and I can say this because SJM herself told us that BtVS was quite an influence for her, especially with this series.

Sarah herself is very smart and well-spoken and funny. She told a lot of hilarious stories, and talked about A Court of Mist and Fury, which had just come out the day before, though she couldn't say MUCH about it, because of spoilers. But there were lots of great questions like, "If you threw all your characters into a Hunger Games-style arena, who would win?" (Aelin, who would burn everything and everyone to the ground) and "If your characters played a game of Monopoly together, who would it go?" (Aelin would try to steal money from the bank, and then get mad and flip the board. And burn it.) I'd never laughed so much during an author event (and I usually laugh a lot!) SJM actually reminds me a lot of Jennifer Lawrence, with her candid humor (especially talking about food a lot!)

And then I actually got to meet her! I didn't get a picture WITH her, but I got to chat with her a little bit and I got my book signed :) 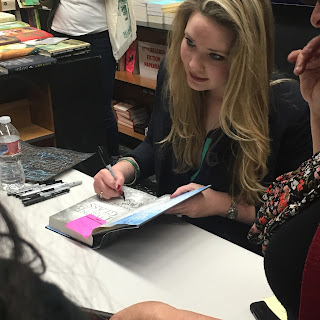 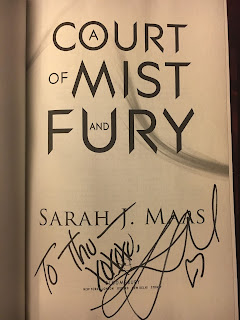