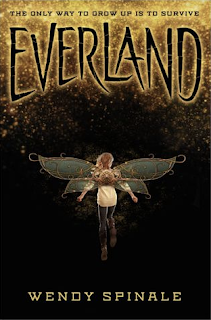 Summary: London has been ravaged both by bombs as well as by a deadly virus, leaving no adult survivors. The devastation comes courtesy of the queen of Germany and her son, Captain Hanz Otto Oswald Kretschmer. Among the few survivors is Gwen Darling and her younger siblings Joanna and Mikey, who are barely scraping by, pilfering whatever is left from the abandoned buildings they find.

Captain Hook and his Marauders have been kidnapping children in hopes of finding the one child who might be an Immune, but these children have disappeared, never to be heard from again. When they take Joanna, Gwen must put her trust in the mysterious Pete and his winged companion, Bella. Pete is the leader of an underground city of orphaned survivors, and with their help, Gwen might just be able to reunite what's left of her family. But they will have brave the dangers of a crumbling London - now christened Everland - and face Captain Hook in order to reunite Gwen's family.


Thoughts: I always love a good retelling, and this is one of the most clever story retellings I've ever read. It's set in a post-apocalyptic London, but with a hint of steampunk (the Jolly Roger is an airship!), so it's got a classic, timeless feel to it.

Spinale's biographical blurb states that she used to work for Disneyland, so unsurprisingly, this book's got everything you might have loved about the Disney Peter Pan movie, as well as some improvements. (Note: I've never actually read the novel; I've only ever seen the movie, as well as various adaptations.) First off, while Pete is still the same intriguing, charismatic figure that he always is, this Pete is a lot more mature and admirable. He truly feels responsible for all the boys in the Lost City, and he especially feels responsible for Bella, who is a few years younger and who is like a younger sister to him. At one point, he tells Gwen how important it is to him that the Littles (the younger Lost Boys) have some semblance of an innocent childhood, since they have already lost so much due to war and disease. Peter Pan threw a temper tantrum about growing up; Pete wants to help his Lost Boys hang onto their childhood because it's all they have left.

Gwen is also a refreshing departure from Wendy - she's not great at the survival thing, but whatever skills she lacks, she makes up for in bravery and compassion. She's not a delicate English lady, as Pete tells her. She has reluctantly taken on the role of adoptive mother to her two siblings after the loss of their parents at the age of 15, but she is willing to fight tooth and nail to keep her family together.

Bella, of course, is the Tinker Bell character, and she is wonderfully complex while the movie Tink was really quite spiteful and mean. Yes, there's a bit of a jealousy angle, but it's not quite what it was in the movie - in this case, Bella and Pete are survivors, and they've relied on each other for survival. Gwen's appearance in their lives disrupts this dynamic and threatens to upset this balance. She's an interesting character, and she even has wings and fairy dust! (You'll see. Just trust!)

Hook is perhaps the biggest departure. The book actually alternates between his POV and Gwen's, which makes things really interesting. He's not the mustachioed buffoon, but an older teenager, sent to England to run his psychotic mother's errand of conquering England, and in doing so, he's essentially triggered an apocalyptic event. And he already had a troubled relationship with his mother, so on top of that, he's got to live with the guilt of the destruction he's caused, and the only way he feels he can redeem himself to his mother is to come home with a cure for the virus.

There are a bunch of other interesting characters as well, particularly among the Lost Boys, and you might be glad to know that Lily is not a racist caricature in this version :) I just felt like this book did such an amazing job of including everything that we knew and loved from Peter Pan while also making it cooler and less problematic. I was riveted, and would've finished it much sooner if I'd had more leisure time to read this week!

PS - I got this in my May Owlcrate box, so I have the hardcover copy, and it's gorgeous - the endpapers have this lovely texture, and the dustjacket is that cool rubberized texture with gorgeous steampunk artwork. It's really beautiful!
4 stars Owlcrate steampunk subscription box Wendy Spinale YAF