Holding Up the Universe by Jennifer Niven 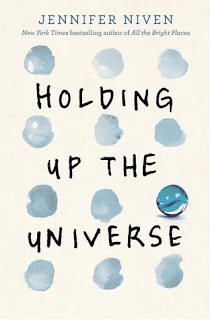 This ARC was provided to me for free.

Summary: Libby Strout is attending school for the first time. After her mother passed away, she became a viral cautionary tale as the nation watched her being airlifted out of her home because of her size. She has lost some of the weight but none of her spirit, and she is determined to succeed at a regular high school, despite the looming threat of bullies and harassment.

Jack Masselin, handsome and well-liked, is hiding a serious secret - he suffers from prosopagnosia, a brain condition where he cannot recognize faces. He has learned to get by using identifiers to figure out who people are (counting freckles, noting hair styles, etc.) and also by not letting anyone get too close to him. Jack isn't a bad guy, but it's easier for him to let on that he is one.

When a bullying incident throws the two of them together for after school detention, they form a close bond as they both try to navigate the treacherous waters of high school with their respective struggles.

Thoughts: Let's get this out of the way first - after the sobfest that was Niven's first book, I was half-expecting the same sort of thing to happen here. Maybe this is spoilery of me to say, but luckily, this is not that kind of book.

Now let me also address this - a lot of people on Goodreads have taken it upon themselves to give the book bad ratings based solely on the synopsis, which they find to be offensive because of how it discusses obesity and mental illness. I'm not here to say that those people's feelings are invalid, but I will say that, as someone with a pretty strict filter for that sort of thing, I did not find this book to be problematic in those respects. (I did find it problematic in a different way, but I'll discuss that later.)

THAT SAID, let me also advise that as far as being fat goes, I'm on the small end of plus size (I'm big enough to feel the effects of our fat-shaming society and to not be able to shop at most stores easily, but I'm not big enough to experience the kind of harassment that Libby experiences), and also, I do not have any disabilities to speak of, so I am reading this from a fairly privileged point of view. All I will say is that it's better to judge a book after you've already read it, rather than just on a synopsis that was probably provided by the publisher. (For that reason, I always write my own synopses on this blog, if you haven't noticed.)

So, I did really enjoy this book. I know the aforementioned pre-judgers have said things like, "Not another book that dehumanizes fat people!" But I really feel like this book does the total opposite of that. Libby is so, so, so wonderfully human. I have seen those awful tv specials which completely sensationalize the real-life people who do struggle with mobility due to their obesity. Those shows absolutely turn people into circus acts, and they're terrible, and I'm going to be honest that once upon a time, I did buy into their sensationalism and I would watch these shows feeling something like pity and disgust. (Now, I feel disgust for the people who are behind these shows.)

Libby is not lurid entertainment to be consumed; she's a human being, and this book does a wonderful job of showing that. (It alternates between Libby's and Jack's POV.) She loves reading; she loves to dance; she's exhilarated about learning how to drive; she can't wait to have sex someday. She also deals with some very real and very awful harassment at the hands of the other students, but she's also got a fierceness that can't be beat. At one point in the story, she says she's worried about being known as the fearless type of fat girl, because it comes with expectations, and in a way, that's quite a meta observation because clearly, there are a lot of expectations that come with writing a character like hers.

Jack is also fascinatingly complex. I had never heard of his disability before, and I can imagine how incredibly difficult it must be, thanks to his narrative POV. I felt like his fears about being officially diagnosed felt very real ("fears," as in, "Once I know that I officially have this condition, what am I going to do about it?"), and the way that he tries to maneuver the tenuous social circles of his high school was very human too. He's not a perfect hero. There are a lot of decisions he makes that will leave you wincing. But we know he's a good guy, even if he has trouble seeing that about himself.

Their love story feels real too. I haven't read a lot of books where a main character is overweight (I have Dumplin', but haven't read it yet), but I feel like it would be really easy to turn things into a fairy tale, ugly duckling sort of story where the fat girl drops the weight and suddenly everything is okay. Or for the relationship to revolve around fatness. At its core, this book is about what it really means to see someone, and it addresses this beautifully.

My one, ONE point of contention is how this book handles race, and let me preemptively say that I'm not accusing the author of the r-word, so don't jump down my throat.

Firstly, I appreciate that there is racial diversity in this book, as Niven makes a point of describing people's skin color or even straightforwardly identifying when we're supposed to picture white people, instead of just letting white be the default. Kudos for that.

I guess my issue is in the depiction of the POC that she did include, and these are not big things, but I  winced a little. Jack and his two brothers are half-black, and (this is not a spoiler, as it's mentioned early on), they lived across the street from Libby when she was younger. She didn't know who they were at the time, so she just referred to them as Tom, Jim, and Huck. You know, as in, characters from Mark Twain novels, particularly novels that have found themselves on banned book lists because of addressing racism (as well as the prevalent use of the n-word). As soon as I made the connection between their nicknames and their race, it made me grimace a little. I'm sure Niven chose those names as an homage (and also because Libby is an avid reader), but *winces* I dunno if I can fully get behind that. I mean, I get it, Huck Finn was a commentary on racism rather than an endorsement of it, and it's probably more so a reference to their adventures and mischief rather than racial tensions, but... *shrug*

I also noticed that Caroline and Kendra, the two Queen Bees of the high school, are POC, and that Caroline, Jack's on-and-off girlfriend, specifically is black. And Libby is white (unless I totally missed something). And I know that in this particular social world, it's harder to see how white privilege comes into play for Libby, who is treated horribly by so many, including Caroline. But still, I feel like race dynamics isn't even a consideration, and it should be, at least a little bit, considering how they're in the Midwest (?) and the two most awful girls at the school are the only two explicitly identified as POC. *shrug* I don't know, there's a lot to unpack about racial dynamics and intersectionality here, but I'm not ready to fully get into it in this blog post.

That said, I still really, really enjoyed this book, and I highly recommend it.
4 stars Jennifer Niven YAF