Poison or Protect by Gail Carriger 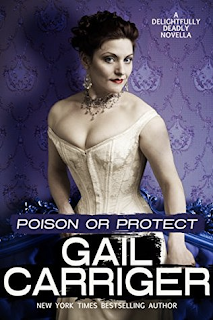 Summary: This novella takes place in the same universe as Carriger's other works - it doesn't require that you have read the Finishing School or Parasol Protectorate series. (But come on, why wouldn't you?)

Preshea, one of the characters from The Finishing School series, is now grown and known Lady Villentia. She is also known as The Mourning Star, having had four husbands who have all died by suspicious means. Of course, no one else knows that Preshea is a trained intelligencer and assassin.

Preshea takes an assignment to protect the Duke of Snodgrove from assassination at his own house party. Little does she know that Captain Gavin Ruthven has also been assigned to do the same, by a separate party. The two are instantly drawn to each other. Preshea is unlike any woman Ruthven has ever known, and he seems to be the only man she's ever met who isn't interested in using her or her body.

But after a lifetime of both giving and receiving cruel treatment, Preshea fears that she is too broken to properly love him.

Thoughts: This short, enticing little read is exactly what I love about Carriger's work - it's witty, full of intrigue, and bursting with FEELINGS. Whether her stories involve actual love scenes or not, I still love reading about people falling in love. (This one does involve love scenes, by the way. Quite sexy ones.)

I remembered Preshea because of her name (in TFSS, she was known as Preshea Buss), and I had to look up who she was exactly, but it wasn't that important. I think that if you've never read any of Carriger's work, you might be a little confused about the vampires, werewolves, and ghosts, and how all of that works within this universe, but it's not a major impediment to understanding Preshea and Ruthven's story. The supernatural element is more part of the setting than the plot, in this particular case. So, knowing Preshea's precise history in TFSS isn't quite so important, but you do need to know that she has a particular skill set that the other ladies around her don't have :) (And it does get explained, but you might as well just read the series and experience it for yourself.)

One thing that I really liked was that we learned a little bit about her personal history and about the effect that her job has on her. When reading TFSS, it's easy to get lost in the whimsy and forget that these girls, as much as we admire them, are being trained to kill and that the act of taking a life is not something to be taken lightly. It was nice to see the emotional consequences addressed in this novella.

There is going to be a whole series of these standalone novellas, so I'm very excited!
4 stars adult Gail Carriger romance/erotica steampunk supernatural