Fracture Me and Ignite Me by Tahereh Mafi 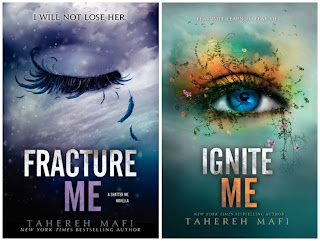 Summary: These are the last two installments of the Shatter Me series, and therefore, this review will contain spoilers for the previous books. You can find my previous reviews here and here.

Fracture Me is a novella told from Adam's point of view, discussing what happened during the final battle in Unravel Me when Juliette gets taken away. Whereas the novel followed her, this novella follows him in the immediate aftermath.

Ignite Me is the final novel of the trilogy. Omega Point has been completely destroyed, Juliette has died (and come back), and the core group of Omega (including Adam, Kenji, James, and Castle) are in hiding, barely scraping by. As Warner hides her at the base and helps her recover, Juliette starts to formulate a plan to take down the Supreme Commander once and for all - but she needs Warner and her friends to work together, and that means dealing with some major issues (which mainly involve her, Adam, and Warner).

Thoughts: As far as Fracture Me goes, I'm just going to share with you some comments that I made on Goodreads:

"What would she do without me to help her?" *eyeroll*
You're not winning any points with me, Adam.

Why is Kenji consistently awesome and both Adam and Juliette are like, "Hey, he's amazing, and I don't give him enough credit," and he's way more capable than, like, ANYONE, but he's still not the hero of the story? And yeah, don't think I haven't noticed that that's generally how Asian dudes are written - always the bridesmaid, never the bride.

I still have the last book to read, but I'm going to choose to imagine a universe where Kenji is front and center and gets all the credit he deserves. #TeamKenji

That basically sums up my thoughts - I know Adam is supposed to be kind of insufferable at this point, and the novella being from his point of view doesn't redeem him any for me, aside from the parts where he talks about James. But I do think that, for people who are confused about his sudden 180 when it comes to Juliette in the final book, this novella sheds some important light on his feelings. When Juliette (eventually) starts realizing that she's not sure if what they had was real love, and she gives some examples from her point of view, you can look back at this novella and see that Adam also was probably not "all in." He talks about how he will always put his brother first every time, and that's an important thing to remember when you get to the parts in Ignite Me where he's being really abrasive to her.

I liked Ignite Me, but some of the things that I REALLY liked about the series started to get a little... wearisome... by the last book. Namely, Juliette's hemming and hawing about her feelings. I love that she otherwise takes charge of rebellion and is fabulously assertive about THAT, but when it comes to Adam and Warner, it takes her a long, long, long time to just suck it up and deal with the reality that the more she tries to spare people's feelings, the more she actually ends up being hurtful. I was SO glad when she finally just bluntly says what she feels, because being in her head up until then was getting pretty tiresome.

I also have gripes about the ending. I know it leaves room for possibly more books, but I am more grumpy about the pacing of it. I remember seeing that I was 90% through the book, and they still hadn't started the final climactic mission yet, and I was like, "So... ARE they going to be able to wrap this up in the time we have left, or what?" It happened quickly and abruptly, and I just think that I would've gladly traded in those many pages and pages and PAGES of Juliette's inner romantic turmoil for a better fleshed-out final battle and denouement. *shrug*

Overall, I do recommend the series. They were enjoyable, engrossing reads; the FEELS are intense; and the characters are memorable. I do actually wish there was more to this series - there is more story to tell here, whether it's backstory or continuing story. If that ever happens, I will definitely be on board. I know it sounds like I was griping a lot in this particular review, but you know what, I really liked where the characters were going by the end of the book, and I just really wish there was more.
3 stars dystopian Tahereh Mafi YAF