One by Jewel E. Ann 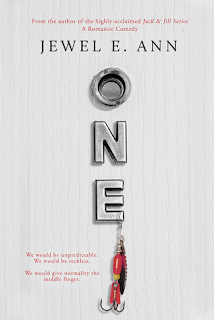 This book was provided to me for free in exchange for an honest review.

Summary: This book is a spinoff from Jewel E. Ann's Jack & Jill series, and can be read alone, but contains spoilers for that series. My reviews for those books can be found here and here.

Having once lost her leg and her boyfriend in a car accident, Lake Jones has managed not only to survive but to thrive, working as a model/tester for experimental robotic prosthetics. However, her romantic life is lacking. Three years ago, she had met Cage Monaghan, the man of her dreams and her second chance at total happiness, but due to circumstances, they weren't able to keep in touch.

Now, thanks to a new neighbor, he is back in her life again, and the connection they felt that one day is stronger than ever - but Cage is on the path to football stardom, and their pasts and futures might prove more challenging than they expected.


Thoughts: I loved this book, but that should come as no surprise, because I've loved all of Ann's books.

This is a completely different book from the Jack and Jill series, important to note - while that trilogy was a thriller/mystery romance, this book is totally funny and sweet and at times feels-y. Lake and Cage were both memorable characters who totally had chemistry and whom (I'm sure) we were all shipping from the moment they met, so I know I'm not the only one who's glad that they got a book all to themselves.

Lake is hilarious. She says a lot of things that I might be thinking, but wouldn't necessarily say. And I felt like her character arc is very natural and believable - she is doing the best she can to keep moving forward, but it's not a smooth journey, and she still has hiccups along the way.

Cage has also dealt with tragedy and has lingering issues as well, and this is something they help each other through. He is totally a perfect romance hero, in the sense of being absolutely alpha-looking (he's a football player) but also being a sensitive, loving, tampon-buying sort of guy. Do men like this exist outside of fiction? I wouldn't know, but it's a nice thought. :)

Their love story is totally different from the ones in the main series, in the sense that there are no murders, kidnappings, secret identities, etc., but there is more than enough conflict and drama to suck you in for the entire book. It is drama that is real, for the most part - I mean, I'm sure most of us don't have to deal with being famous or dating someone who is famous, but an issue such as finding work/life balance is enough to destroy a relationship all on its own, that's something many "normal" people have to deal with.

I had one gripe about the book, and it had to do with the two POC characters. I want to say first that I'm NOT NOT NOT accusing anyone of racism, and that I believe that this was unintentionally done. But, as someone who thinks/writes/reads about race issues a lot, I feel I would be remiss if I didn't point this out. There is a black character whom Lake compares to a gorilla and whom she calls Kong as a nickname. Now, I get that she is referring to his stature, because he's a really big guy, and I get that she's using the name as a term of endearment, but there is a long history of racist propaganda that compares black people to monkeys and gorillas. There is also a Chinese man whom Lake knows, and she is constantly referencing his short stature and making jokes about him being gay, and I get that (again) it's not in a hateful way, but there's also a long history of Asian men being emasculated in Western culture. Again, I'm not saying that any of this was intentional - there are a lot of people who are unaware of these stereotypes, and these two characters could've easily been white guys referred to in the same manner without having the same impact, but such as it is... it was something I noticed, and I winced a little.

But otherwise, I loved, loved, loved this book, and I'm absolutely purchasing the finalized copy when it comes out at the end of this month. I will basically read anything Jewel E. Ann publishes, so I am so grateful and happy that I got a chance to read this one a little early. I absolutely loved the story of Cage and Lake.