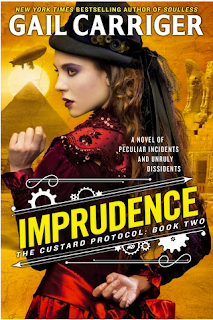 Summary: This is book 2 of the Custard Protocol series, and it takes place in the same universe as her other series, but much later in time. This review may contain spoilers for the first book, which you can read about here.

Rue and her dirigible crew sail the aether again as issues both personal and political force them to head to Egypt. Their trip to India in the first book led to the discovery of new races of supernaturals, and not everyone is happy about this, or about Rue's executive decisions. The odd behavior of her father's wolf pack and their tension with the local vampire hive means that Rue needs to put on her big girl hat and take to the skies once again, this time carrying some unusual cargo.

But they keep getting attacked, and as they suddenly find that they need to sail even further away into the uncharted areas of Africa, Rue finds a whole host of new problems to deal with, not the least of which are her feelings towards her flirtatious Chief of Engineering, Quesnel Lefoux.

Thoughts: I loved it, of course! Cheeky, clever, and sexy, Imprudence really kicked it up a notch from the first book, and those of you who are diehard Parasol Protectorate fans will definitely feel a range of feelings as you say farewell to some beloved characters. I was unexpectedly emotional.

Carriger has said since the beginning that this series will revolve mainly around the concept and consequences of British colonialism, and this gem (said by Tasherit, IIRC?) caught my eye: "It’s what the British Empire does. You couldn’t possibly think your expansion a glorious, enlightening, civilising force? All those books and you never once realised that is the song all conquerors sing?" I made note of it because I felt like it was such so important thematically. I don't know too much about British colonialism, but I feel like the same thing could obviously be said about America.

I loved the juxtaposition of Rue and Tasherit. Both are examples of rare, unique races that the Empire has no idea what to do with (Rue being a metanatural, Tasherit being a werelioness), and they are both strong, fierce women who are differently but equally talented and capable at taking charge of the Spotted Custard (Rue's ship).

They are also both dealing with interesting romantic entanglements - Tasherit has eyes for Primrose, who also appears to be interested but believes that she needs to get engaged to a man and live out her life the way society wants her to. Rue, in the meantime, is now of majority age and has an arrangement with Quesnel for certain "lessons." It all seems fine until she starts to realize that there might be something more to this arrangement that she's not sure she's ready for.

All in all, I thought this book was really great, and I can't wait to read what comes next. (Oh dear, there is a book that comes next, right?)
4 stars adult Gail Carriger steampunk supernatural