A different sort of post than usual: since September, I have gotten SUPER into bullet journaling, and one of the things I've been trying to do every month is to dedicate a page to a literary quote about that month.

Here's what I currently have in my BuJo, having now set up everything for the rest of 2016: 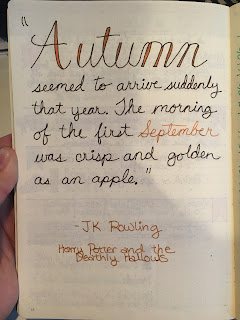 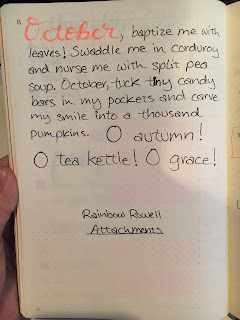 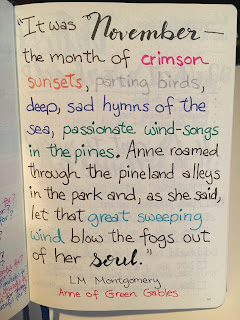 I am already getting ready to start a new notebook, since I will definitely have finished my current one by year's end, and I've decided that I want to continue this tradition, because 1) I love literature, 2) I get to practice my handlettering (I've gotten better, right?), and 3) it's just cool, man.

I've compiled a list of quotes to use for next year (with new ones for September through December!) and I thought I'd share them here with you, in case you would also like to do something similar or even make a calendar out of it. These are quotes I've pulled from Goodreads or from other people's suggestions. I tried to pick writers that I'd at least heard of, even if I haven't read the specific books the quotes are from. I also tried to go with YAF authors when possible, because that's what I love, and I tried to choose quotes where the month itself has some bearing on the meaning of the quote (so, it's not just mentioned in passing.) This is by no means a comprehensive list, but they are the ones I plan to use as I go through 2017.

Enjoy! If you make some cool art out of any of these, I'd love to see it!

"January was a two-faced month, jangling like jester's bells, crackling like snow crust, pure as any beginning, grim as an old man, mysteriously familiar yet unknown, like a word one can almost but not quite define." — Patricia Highsmith (The Price of Salt)

"We were just two teenagers, looking up at the sky on a cold February night. So no, he didn’t give me flowers or candy. He gave me the moon and the stars. Infinity." — Jenny Han (We’ll Always Have Summer)

"It was one of those March days when the sun shines hot and the wind blows cold: when it is summer in the light, and winter in the shade." — Charles Dickens (Great Expectations)

”As full of spirit as the month of May, and as gorgeous as the sun in Midsummer.“ — William Shakespeare (Henry IV)

"Green was the silence, wet was the light,
the month of June trembled like a butterfly."
— Pablo Neruda (sonnet)

"I've never really thought about it before, but it's a miracle how many kinds of light there are in the world, how many skies: the pale brightness of spring, when it feels like the whole world's blushing; the lush, bright boldness of a July noon; purple storm skies and a green queasiness just before lightning strikes and crazy multicolored sunsets that look like someone's acid trip." — Lauren Oliver (Before I Fall)

"August rain: the best of the summer gone, and the new fall not yet born. The odd uneven time." — Sylvia Plath (journal entry)

"But when fall comes, kicking summer out on its treacherous ass as it always does one day sometime after the midpoint of September, it stays awhile like an old friend that you have missed. It settles in the way an old friend will settle into your favorite chair and take out his pipe and light it and then fill the afternoon with stories of places he has been and things he has done since last he saw you." — Stephen King (Salem's Lot)

"I'm so glad I live in a world where there are Octobers."  -- L. M. Montgomery (Anne of Green Gables)

"The unwelcome November rain had perversely stolen the day's last hour and pawned it with that ancient fence, the night." — F. Scott Fitzgerald (This Side of Paradise)

"Christmas was coming. One morning in mid-December, Hogwarts woke to find itself covered in several feet of snow. The lake froze solid and the Weasley twins were punished for bewitching several snowballs so that they followed Quirrell around, bouncing off the back of his turban." — J.K. Rowling (Harry Potter and the Sorcerer's Stone) (or Philosopher's Stone, depending on which country you hail from)