Secrets of an Alpha Male by JD Hawkins

I'm super excited to bring you my review of the latest JD Hawkins novel, Secrets of an Alpha Male. But first, a couple disclaimers: 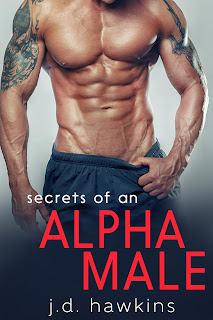 This book was provided to me for free by the publisher in exchange for an honest review.

Summary: Connor is an up-and-coming MMA fighter looking to make his mark in the UFC by going for the gold. He's got all the swagger you can expect, but people are wondering whether he's got the moves to back up his trash talk.

Frankie is a yoga instructor who knows her stuff - except for the part that involves keeping her yoga studio from going under. So when she gets the chance to hand her business card to Connor, she doesn't pass it up.

Two seemingly opposite personalities, they've got a chemistry that can't be ignored, but with their huge dreams on the line (his title shot and her studio), will their attraction be more helpful or hurtful?

Thoughts: Though this is the first JDH book I've formally reviewed, it's not the first one I've read. I've read all of his previous books, and I like them because 1) it's interesting to read a romance novel written by a dude for once (no shade to women writers - I've just always been curious about possible differences in the gender characterizations, and 2) while pretty much all of his male heroes can be considered "alpha," I find that they stay nicely on the good side of my "problematic line" - you know, the line you draw for yourself to determine whether you find something is too problematic to be comfortable or not. I've read many male characters who cross that line for me (like the dudes of Black Dagger Brotherhood - sorry! I know lots of people love them), but I like how all of JDH's men have not set off any warning bells for me. They are definitely upfront about their sexuality, and they definitely go after the women they want, but they aren't, you know, creepy about it. (In my opinion, at least - your mileage may vary.)

So, back to the book... I've read novels about fighters before, but I only recently watched my first UFC pay-per-view, so it provided interesting context for me. (Plus, JDH himself is an MMA fighter as well.) There is an instant setup of Connor's "alpha male" persona - he talks a big game in his interviews, but it's clear that there's a lot more depth to him as well, and that makes him likeable. In fact, I like how both main characters fight against type - Connor's more than just an MMA thug, and Frankie is more than just a hippie throwback. They both have rather academic understandings of their passions, and I really liked that about both of them. As they are embarking on their new relationship with each other, they are also dealing with their own personal journeys. I love when characters in romance novels are still able to be, you know, individuals with their own lives to deal with (and they deal with them together).

I also really liked the side characters, like Butch and Jaime. I like that they also could've easily been written one-dimensionally, but JDH really adeptly shows us other sides to them, and it makes me appreciate them more as foils.

Overall, a good read. The sexy times alone make this book worth the price of admission, but the actual story is pretty awesome as well. I've liked each of JDH's books so far, and this one is no different.
4 stars adult JD Hawkins romance/erotica