Ever the Hunted by Erin Summerill 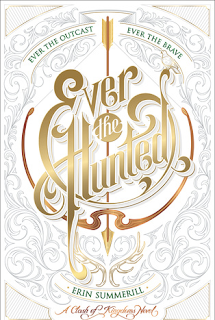 Summary: Britta is all alone this world - her father, bounty hunter for the King of Malam, was murdered two months ago, and the only other person who cared about her - a boy who apprenticed with her father - left without a word well before that. Starving, with her home on the verge of being seized by the government, Britta is then caught poaching in the King's forest. It's a death sentence for sure - until she is offered a deal: her life will be spared if she can hunt down her father's murderer. Who happens to be Cohen, the very boy whom she had grown to love and who had broken her heart when he had disappeared from her life.

With Royal Guards in tow, Britta must hunt down the boy she loves and kill him in exchange for her own life. But as they travel through the country, which is on the verge of war, Britta realizes that things are not what they seem, and the life she has known has been shrouded in secrets.

Thoughts: I was really interested in the premise of this novel (and look how beautiful that cover is!) but man, the execution just did not live up to the expectations for me. I was expecting mystery, intrigue, and danger - a cat-and-mouse game being played by two skilled hunters, an ill-fated love, and a heroine I could root for. What I got was a lot of teen-girl whining. Like, inappropriate whining - I'm not saying that Britta shouldn't have been upset about some of the events that happen and information that she learns, but then she kind of just... ends up whining, especially about Cohen. Like, nevermind that she's on the run for her life and trying to catch her father's murderer and all that - let's hear some more about "OMG why is Cohen being so weird to me? And why can't I control my feeeeeeels???" I think this premise had the potential to be quite an epic quest, but it really fell flat for me. I mean, the whole "hunt down Cohen" thing became a non-issue really, really fast. I would've loved to see some back-and-forth between the two of them, each one trying to outwit the other while also trying to fight their feelings. Instead, the story ended up being a lot less interesting, Cohen ended up being kind of one-dimensional hero type dude, and Britta certainly was not the strong heroine I had been hoping for. (I'm not saying she has to be aggressive and bellicose - Laia from An Ember in the Ashes certainly wasn't, and she was still a very strong heroine - but it always seemed like stuff happened to Britta, and she would just always be like, "Ugh, I cannot even.")

Plus - and I don't know if it's because I was reading an advance uncorrected galley - but the words and phrasing constantly came across as strange to me. Like it was trying to take on elevated language (as a fantasy novel), but it just ended up sounding awkward and antiquated (not in a good way) instead.

That said, it's not like it didn't hook me in and hold me. It was a quick read, and I was eager to find out how it would resolve. It wasn't an unenjoyable read; it just didn't deliver, for me, if that makes sense. I'm not sure whether I will continue with the series or not (the sequel comes out next year), but I really feel like, given some more experience and tighter editing, Erin Summerill could develop into a top author. I saw a lot of potential in this book, and I look forward to seeing what else she will do in the future.
2 stars Erin Summerill fantasy Netgalley YAF