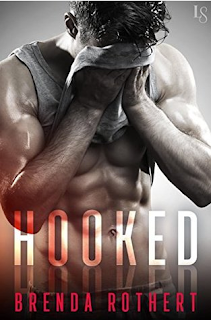 Summary: Miranda is struggling to put herself through school, cleaning hotel suites by day, and studying and bartending by night. But she's proud of what she's accomplished, and she isn't interested in any romantic entanglements.

Until she meets Jake Birch, professional hockey player and practically a professional womanizer. Jake has never met a woman like Miranda before, and he's intrigued. But they come from two different worlds (she cleans his hotel room, for crying out loud), and when some added past drama comes into the mix, the complications start to grow.

Thoughts: I liked the premise of the story, but in the end, I felt like it fell a little flat for me. I would've liked to the characters a little more fleshed out, a little more nuanced.

This is not a spoiler, since it's in the official book summary, but Jake is forced to go out with the team owner's daughter or else he'll get benched/fired, and she is crazy to the point of being cartoony. Like, actually crazy, as you will see by the end of the book, and I've read enough of these books to know that I really, really hate the manipulative crazy-jealous girl trope. They're often presented straightforwardly as villains, like they just woke up and decided to be awful people. Maybe they did, I don't know, but no one ever seems to question that. The one thing that really made me sit up and take notice about this particular book is that Miranda at least feels sympathy for this girl as well as all the women Jake has ever tossed aside, and when the inevitable drama happens, she actually tells him, "You were awful to me, and you were awful to her too." I actually wanted to applaud that.

But otherwise... I felt like there wasn't enough complexity to the characters, and Jake's personal issue (which IS a spoiler, so I won't describe it) felt kind of strange to me - like, I don't understand why he felt the way he did, as strongly as he did, to the point of making it as big an issue as he did. *shrug* And the ending was a little sudden, and a little too fluffy for me. I did like Miranda, and I liked her sass, but Jake was like "eh."
2 stars adult Brenda Rothert Netgalley romance/erotica