The Lovely Reckless by Kami Garcia 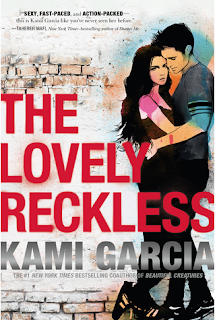 Summary: Frankie Devereaux wishes she could forget witnessing her boyfriend's murder - except that due to PTSD, she can't remember enough of it to help catch the killer.

In the months since, Frankie has seen her life slide downhill - once a Stanford-bound straight-A student at a wealthy private school, Frankie lands herself in some hot water which leads to her getting sent to live with her father on the "bad" side of town.

At her new public school, good girl Frankie is immediately drawn to bad boy Marco Leone, who participates in some very illegal activities. Their chemistry is undeniable, but so are their differences, especially considering that Frankie's father is an undercover cop. And when he finds a lead that connects to Marco, things get really complicated.

Thoughts: This book was everything I think a romance needs to be - engaging, intense, exciting, and packed with FEELS. Yes, there's insta-love and a few other romance cliches in there (bad boy with a heart of gold who falls for good girl, ordinary-ish girl who ends up being Different From All The Other Girls), but I've found that when they're written well, I'm willing to embrace them. Did I get engrossed in the story? Did I turn every page wanting to know more? Did I root for the couple? Absolutely. In fact, I felt like there should've been more smooching.

(Okay, now I feel like a dirty weirdo for saying that. But there wasn't enough kissing! I mean, there was quite a bit of kissing, but it didn't feel like enough. I guess after reading about how individually unhappy Frankie and Marco's lives were, I just really really wanted them to be super smoochy-happy, okay? GO BE HAPPY AND MASH FACES, YOU TWO!)

What elevates this book from being just another generic romance to being a standout story, for me, are the side characters and the subplots. I've read enough romances (adult and YAF) to know that it's very easy to ONLY focus on the main couple and not put much effort into writing nuanced friends/family members/etc. and giving them some stories as well, but I ended up really loving the characters of Lexi and Cruz, and even Abel's story ended up surprising me. And I liked that Frankie's parents weren't totally absent either - that's a thing that happens in YAF sometimes. (Actually, it happens with the other parents in the story.) While not wholly (or even partially) likeable, they affect Frankie's life and are affected by her as well.

The crime stuff? I had my guesses on the murderer early on, and ended up being right, but it was still intriguing and added some action to the story.

This book was over way too quickly, but it was really enjoyable while it lasted.
4 stars Kami Garcia YAF