The Sun Is Also a Star by Nicola Yoon 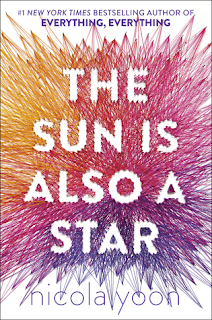 Natasha is twelve hours away from being deported back to Jamaica with her family; Daniel is on his way to an interview for Yale because his Korean immigrant parents really want him to go there and become a doctor. Natasha doesn't have time to fall in love with this wonderful, adorable boy whom she's just met on the street; Daniel knew after one glance at Natasha that they were meant to be.

Over the course of a day, it seems as if the universe is conspiring, according to Daniel. Or, as according to Natasha, is everything just a series of coincidences?


Thoughts: What a beautiful, beautiful book. You KNOW it's a good book when you get to the end, and you're like, "Wait, WHAT? THAT'S IT???? THERE'S NO MORE???" (In my case, I was truly aghast, because there were so many pages left in my copy, and I realized quickly that it wasn't a fake-out ending, but a sneak peek at Yoon's first book, Everything Everything. I was SO disappointed!)

This book is so much more than just a love story. It's a story about family, about fate, about decisions, about regrets, about science, about faith (not just religious), about being American, and about being a citizen of the cosmos. That last one, I phrased intentionally, because the book opens with one of my favorite, FAVORITE quotes in the whole world by Carl Sagan: "If you wish to make an apple pie from scratch, you must first invent the universe."

It's told in alternating points of view between Natasha and Daniel, but it's also told by the people they encounter (or who encounter them), their families, etc. It reminded me a bit of Sandy Hall's A Little Something Different in that way. The book mentions multi-verse theory, in which there might exist multiple universes where different possibilities play out (that's a very simplified explanation), and then it even explores the idea of the butterfly effect and how one person's small decision here ends up changing someone's life over there, etc. I LOVE THIS STUFF.

And let's not forget to mention the timeliness of the subject matter of this book, that in addition to their opposite personalities and beliefs, Natasha and Daniel are Black and Asian; Natasha is an undocumented immigrant on the verge of deportation, and Daniel is an American-born Asian, and both of them struggle with what it means to be American. There's a lot of backstory to both of them, and it's so wonderfully told. I got extremely weepy reading this book - not in an ugly-cry way, but in an "AWWWWW THAT'S SO SWEET" sort of way, and not just because of Natasha and Daniel. (When you get to the Epilogue, you'll see what I mean.)

Yes, this is a story about insta-love, but it's probably the best insta-love story I've ever read, because it's very aware of the fact that it's insta-love, and it's still shamelessly adorable anyway. Yeah, I was REALLY disappointed when it was over.
5 stars Nicola Yoon YAF